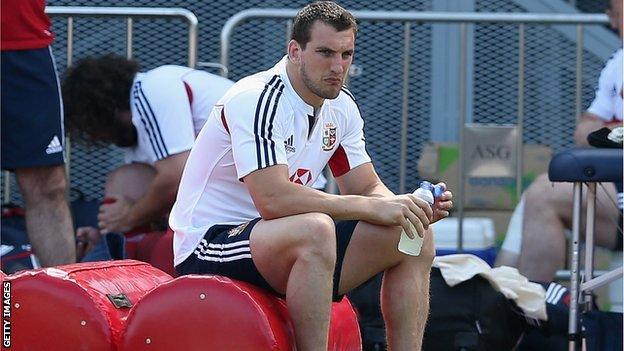 The Welshman, 24, missed Saturday's win over the Barbarians in Hong Kong, the opening match before the Lions travel to Australia for their nine-game tour.

"Sam is progressing well," said Robson. "He is subject to further assessment and we will give our recommendation to the coaches."

The Lions next play on 5 June in a warm-up match against Western Force.

There were also injury concerns over Gethin Jenkins, Sean O'Brien and Rob Kearney but the trio were considered fit enough to train on Sunday before Warren Gatland's squad fly to Australia.

Robson said he was relieved at the lack of injury problems from the Barbarians match, played in high temperatures and humidity, and suggested the experience would equip them for the remaining fixtures in Australia.

"It was tough conditions out there. I think the boys did exceptionally well," he said.

"I'm delighted that we actually have less damage than I would normally expect from a normal Test match.

"Having said that two guy - Paul O'Connell and Tom Youngs - required stitches. It's never nice when somebody gets cut but those were accidents.

"All I can say is that we are going to arrive in Australia with the squad intact.

"We have, for the bulk of the squad, been training for three weeks and some of the training has been pretty brutal and I've been immensely impressed with the work ethic of this squad."

However, Robson believes the experience will help players deal with conditions in Australia, with the first Test in Brisbane on 22 June.

"We might play at slightly higher than that when we get there and, given the winter and spring that we have had [in the UK], the boys would not have been acclimatised to the Australian weather.

"Coaches will often want guys to perform under pressure in training in order to perform at their best in Test matches - what better test than putting them into a sauna and getting them to play for 80 minutes."