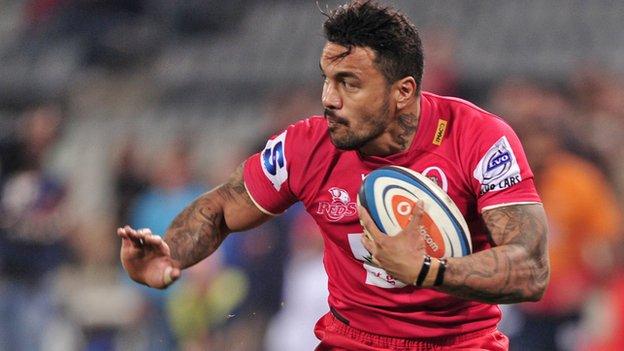 Australia have suffered three more injury blows ahead of the first Test against the Lions on 22 June.

Wing Digby Ioane, flanker Scott Higginbotham and lock Sitaleki Timani have all been withdrawn from the Wallabies 25-man training squad.

Ioane is recovering from knee surgery, Higginbotham has a dislocated shoulder and Timani a suspected broken thumb.

The Wallabies have already lost first-choice hooker Tatafu Polota-Nau to a broken arm and veteran flanker George Smith to a knee ligament injury.

Ioane, Higginbotham and Timani were all likely starters against the Lions.

Ioane had an operation on cartilage in his left knee last week and seems likely to miss at least the first Test in Brisbane.

"Digby is unable to train," said coach Robbie Deans. "His focus is on getting his knee right, which is why we've chosen to bring him in anyway, so our medical staff can oversee the process."

Rather than another winger, Deans - who will add a further six players to his squad on 11 June - has brought in Rebels half-back Phipps to join first-choice Will Genia in the training squad.

"Nick has been playing well, has background with us through his experience last year and is a player who was always in our thoughts," added Deans, who is also likely to name in-form ACT Brumbies scrum-half Nic White among the additions to the squad after next weekend's Super 15 matches.

The chances of Higginbotham or Timani playing any part in the Lions series will be determined after scans.

Higginbotham dislocated his shoulder during the Rebels' Super 15 loss to Queensland Reds on Saturday, while Timani suffered a suspected broken thumb playing for the Waratahs against the Crusaders on Friday.

McCalman's call-up means he will not now play for the Western Force against the Lions in the next match of their tour in Perth on Wednesday. The Lions won their opening game 59-8 against the Barbarians in Hong Kong on Saturday.

There was one piece of good news for the Wallabies, however, with full-back/fly-half Kurtley Beale returning to club rugby on Saturday after undergoing treatment for alcohol-related issues.

Beale is expected to join the squad for training as he continues his rehabilitation.