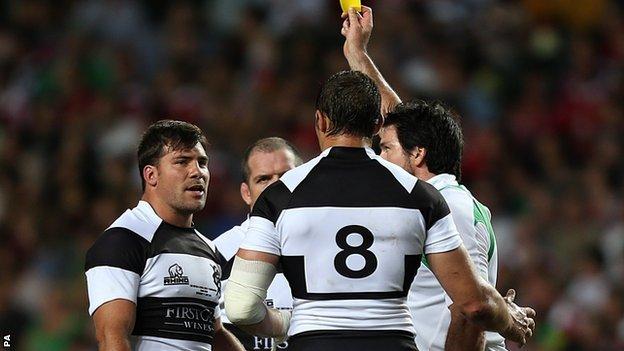 Owen Farrell has played down the incident which led to Saracens team-mate Schalk Brits receiving a ban.

Barbarians hooker Brits has been suspended for three weeks for punching the fly-half in the British & Irish Lions' tour opener in Hong Kong.

But Farrell said: "I was trying to hold him into a ruck, and he reacted to that. It all happens in rugby. There's no dramas there."

He added: "When someone reacts to you, you try not to take a backward step, not just in this occasion but in every occasion. I just grabbed him. There was nothing nasty in it.

"It is a reminder of how vital it is to keep cool and not respond to provocation.

"These are big games, every game for the Lions is massive, and to lose someone to the bin would be massive. You can't afford to do that - everyone has to be disciplined.

"I shook Schalk's hand after the game, and he apologised when he came back on to the field."

The South Africa front rower was given a yellow card during the game before being banned after a hearing on Sunday.

As Saturday's match was Brits's last of the season, he is set to miss Saracens' first three games of next season.

Brits reacted angrily to Farrell holding onto his jersey at a ruck in the first 10 minutes of the game and launched a swinging left arm into the Englishman's face. Sin-binning him, referee Steve Walsh could be heard telling the Barbarians player: "Because of the nature of the game it's only a yellow."

Brits appeared before International Rugby Board judicial officer Steve Lewis at a hearing in Hong Kong on Sunday.

Lewis decided Brits had committed a mid-range offence that would normally see a five-week ban but this was reduced to three "as a result of compelling mitigating factors".

A statement released after the hearing read: "The IRB's sanctions for foul play have been established on the basis that a one-week period of suspension would normally result in a player missing one match.

"Consequently, he is suspended from all rugby up to and including the third Aviva Premiership match of the 2013-14 season, unless the judicial officer confirms in writing that any pre-season match shall be considered meaningful for the purpose of regulation 17.19.11 (d), in which case such match shall be included as one of the three matches."

Brits took to Twitter to apologise for his actions, saying: "Lions played very well tonight. Sorry for the over-reaction brother (Owen Farrell), took it too far. Hope you have a great tour."

After Saturday's game, Lions coach Warren Gatland warned his players they would need to keep their cool under possible provocation in Australia, after Farrell tried to retaliate to Brits' punch.

"Sometimes it is hard when someone lays a punch squarely on the side of your jaw not to react," Gatland said.

"But we are going to emphasise from the start of this tour the importance of keeping our discipline.

"It is a nice reminder that sometimes things happen and you need to take one for the team. If you get whacked and respond, the consequences for the team can be severe.

"We might find a similar situation in Australia if someone is grabbed off the ball and we have to make sure we don't react."