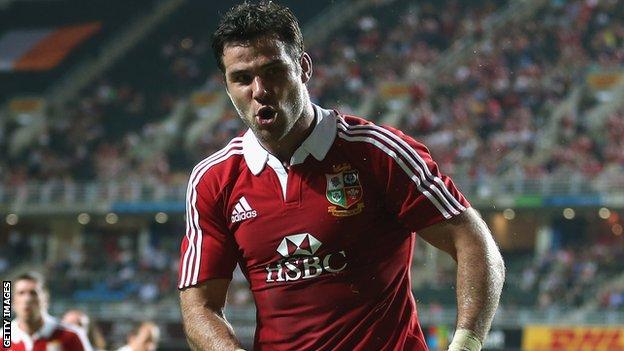 Mike Phillips says the British and Irish Lions will benefit from playing the first match of their tour in hot and humid conditions in Hong Kong.

Wales scrum-half Phillips scored two of the Lions' eight tries and was named man of the match as his side comfortably beat the Barbarians 59-8.

Phillips says the Lions' Hong Kong clash will "do them a world of good".

The Lions face Western Force in Perth on Wednesday, one of nine games, including three Tests, in Australia.

"It was tough, tough conditions. I was blowing," Phillips told BBC Radio Wales.

"Some of my skills were poor at times, but there were some really good performances out there by the boys.

"And as a first hit-out score, all in all we're fairly happy with that.

"Some of us haven't played for a while, so we're fairly pleased with the win and it's something we can build on. I think it will do us the world of good over the next couple of weeks."

In the game's immediate aftermath, Phillips told Sky Sports: "It's a tremendous win.

"We just wanted to come out with a strong performance and I thought the boys fronted up well in tough conditions.

"It's a great way to start the tour and we can push on from here."

He said: "I think I dropped a couple.

"You think you had the ball and you'd look up to see what the defence was doing and it was just straight through your hands.

"It was extremely difficult, but it's testing your skills under pressure.

"[Lions attack coach] Rob Howley says that a lot to us and we just had to make sure that we looked after the ball.

"But unfortunately a couple of times it did slip away from us.

"I've played in pretty cold conditions in Wales, but heat wise that was probably the worst I've ever had.

"It was real tough a times - the ball was like a bar of soap.

"In the tough conditions we put in a pretty solid performance.

"I thought the pack was excellent. They really took it to the Baa-Baas and when we had chances we took them."