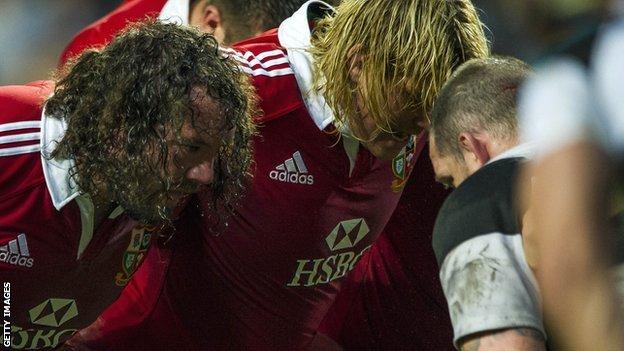 When it was pointed out to Jonny Sexton the Lions are likely to find the temperature a balmy 20C on arrival in Perth on Monday, the Irish fly-half's response was instructive: "It will feel like winter to us after the last few days."

Heading to Australia via a stop-off in Hong Kong might have made some sense logistically and commercially, but from a sporting perspective it will not be fondly remembered.

The questions after the Lions' 59-8 win over the Barbarians on Saturday were not so much about how well the tourists had played but why they were playing here at all.

Australia's ability to only offer nine tour matches meant the Lions needed an extra one somewhere, and opted for a sojourn in south-east Asia ahead of Argentina, the USA or Japan.

Lions officials were adamant the presence of principal tour sponsors HSBC had no bearing on that decision. But regardless of the ins and outs of it, obliging finely-tuned, supremely fit sportsmen to endure heat and humidity on this scale made for a largely unedifying spectacle.

You literally couldn't get your breath at times. It was nothing like I have experienced before

"It was tough in terms of coming here but we have to realise that in every professional sport there are commercial responsibilities and we have known that for a long time," said Lions head coach Warren Gatland.

"But the benefits of spending this week here is that we have trained and played in these conditions. It's almost the same benefit as if we had played at altitude."

The majority of the side for the opening fixture hadn't played a match for three or four weeks, wing Alex Cuthbert for 11, and lock Richie Gray for 12.

In that respect, coming through such a physical ordeal - the latter pair both played the full 80 minutes - was a triumph of will and stamina.

The Lions will need plenty of those qualities in Australia, something beaten Barbarians coach Dai Young - part of the 1989 and 2001 Lions tours down under - felt would be a by-product of this arduous opening mission.

"The Lions coaches said beforehand they were looking to stress the players in different ways, and when they do have that dark moment in Australia, when their backs are against the wall, they will dig deep and I am sure they will benefit from this," he said. "It doesn't do us fatties any good, mind."

Indeed, when even hard-bitten, barrel-chested props are talking about the need for proper rehydration after a game, something is not quite right in the rugby world.

"I don't think beer is probably the best idea tonight, as much as I fancy a cold one," said Lions tight-head Adam Jones, who described the conditions as "comfortably" the most difficult he had faced.

"It felt a bit like heart-burn," he added. "You literally couldn't get your breath at times. It was nothing like I have experienced before.

"Even someone like Justin Tipuric was finding it hard, and he is the fittest bloke I have ever come across."

You wouldn't have known it to witness the Ospreys open-side's efforts, his breakdown work, ability to sense space and vision to exploit it a joy to behold. If and when captain Sam Warburton is fit to return, he will know his form will need to be tip-top just to hold down his own position.

There were plenty of encouraging contributions from many individuals, Jonathan Davies, Stuart Hogg, Toby Faletau and Mako Vunipola among them, while Mike Phillips and Alex Cuthbert both took their tries with aplomb.

Phillips, in one second-half moment where he brought down a charging Joe Rokocoko and then got back up to wrestle the ball off the Baa-Baas' other wing Takudzwa Ngwenya, also exemplified the defensive resolve typical of all Gatland sides.

If some of the passing wasn't the slickest, it was hardly surprising given sweaty hands and a slippery ball.

At 30-3 up three minutes into the second half, the Lions could easily have taken their foot off the gas, and would have been forgiven for doing so in the circumstances.

But five more tries came in the final 22 minutes, after an influx of replacements including Leinster trio Cian Healy, Jamie Heaslip and Jonny Sexton, and Leicester hooker Tom Youngs, all of whom have had only three or four training sessions with the rest of the squad after their domestic finals.

"The shape we had didn't change, which augurs well for us," said assistant coach Rob Howley, who also praised the impact of replacement scrum-half Conor Murray. "He was a running threat and created lots of opportunities around the tackle area."

Most of those on bench duty on Saturday, plus Ulster's Tommy Bowe, Wales duo Leigh Halfpenny and Ian Evans, and the rest of the Leicester and Leinster contingents, fitness permitting, can expect to be involved against the Western Force on Wednesday.

It is likely to be one of the stiffest tests the Lions will face before they tackle the Wallabies.

The Force may only be 14th on the Super 15 ladder, but have a reputation for raising their game against better opposition, having beaten the Queensland Reds and Canterbury Crusaders this term, and only lost by a point away to leaders the Waikato Chiefs recently.

They have also supplied only one player - wing Nick Cummins - to the initial 25-man Australia squad, so will be close to full strength against the Lions unlike the Reds, New South Wales Waratahs and ACT Brumbies.

After the survival test of Hong Kong, a proper game of rugby awaits, and a more thorough examination of this Lions squad's possibilities.