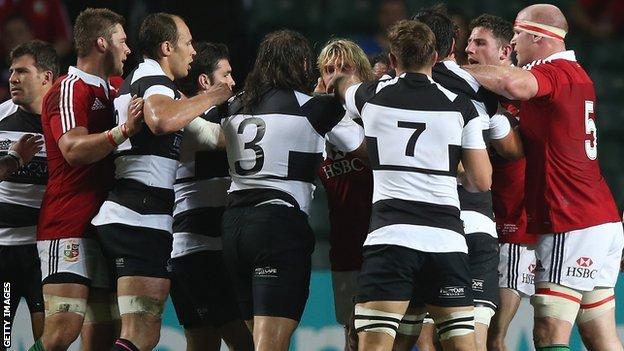 Head coach Warren Gatland warned his Lions they will need to keep their cool in Australia after they emerged unscathed from a "dominant" opening tour win against the Barbarians.

Owen Farrell responded to being punched in the face by Schalk Brits by lashing out at his Saracens club-mate.

Brits was lucky to escape with a yellow card in Hong Kong and has been cited.

"Sometimes it is hard when someone lays a punch squarely on the side of your jaw not to react," Gatland said.

"But we are going to emphasise from the start of this tour the importance of keeping our discipline.

"It is a nice reminder that sometimes things happen and you need to take one for the team. If you get whacked and respond, the consequences for the team can be severe.

"We might find a similar situation in Australia if someone is grabbed off the ball and we have to make sure we don't react.

"From our point of view the good thing was that Owen wasn't injured or knocked out.

"I was pleased Brits wasn't sent off, and just given a yellow card. Had they played with 14 men it would have been less of a hit-out for us."

He later took to Twitter to apologise for his actions, saying: "Lions played very well tonight. Sorry for the over-reaction brother (Owen Farrell), took it too far. Hope you have a great tour."

Gatland, whose men now head to Australia for nine further games culminating in a three-Test series against the Wallabies, declared himself "very pleased" after an eight-try victory against opponents who struggled badly in the oppressive heat and humidity.

Scrum-half Mike Phillips and wing Alex Cuthbert both grabbed a brace of tries, while open-side Justin Tipuric impressed in attack and at the breakdown, and lock Richie Gray and flanker Dan Lydiate both played the full 80 minutes to prove their fitness after recent long lay-offs.

"It was a good run-out, and exactly what we wanted," Gatland added. "It was a lot tougher than the scoreline suggests.

"We probably missed three or four tries when we were guilty of maybe trying to force it, but we kept our composure and the scoreline reflected our dominance in the end.

"It was tough out there. The players said the ball was like a bar of soap, with the humidity and heat.

"There is no-one I was unhappy with in terms of their performance. I thought our control was excellent and our kicking strategy was pretty good. We can't complain.

"It was disappointing to concede a try but going forward, the players who played today have laid down a marker. It was about us putting some foundations in place."

Captain Paul O'Connell described the energy-sapping conditions as "probably the most difficult I have ever played in".

"It was just hard to recover during the game," he added. "You would be huffing and puffing and generally you get a break for a scrum or line-out, but the heart-rate just didn't seem to go down.

"But it is great to have got that game under our belts. We did a lot of good stuff."

Barbarians coach Dai Young, a three-time Lion himself, believes the tourists will go on to beat the Wallabies in the Test series starting in three weeks' time.

"The Lions were very efficient," he said. "I would have thought they will feel there is still room for improvement, but they certainly starved us of possession, both at line-out and scrum.

"We were tackling for large parts of the game, and that was always going to sap our energy, but I thought our commitment was far better than it was against England [when they lost 40-12].

"I expect a Lions [series] victory in Australia - I think they have got too much strength in depth across the board.

"Competition for places is going to be huge, and that is only going to push up the performance levels."