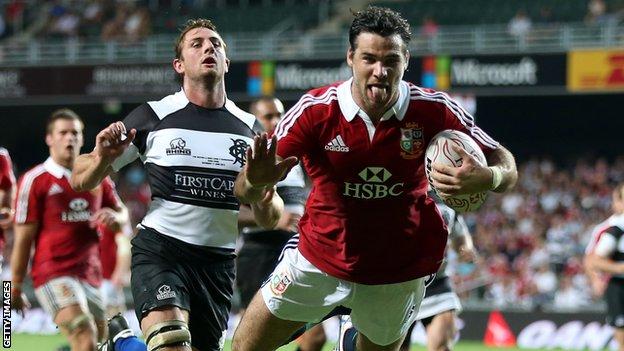 The British and Irish Lions launched their tour with a convincing eight-try victory over the Barbarians in the sweltering heat of Hong Kong.

In conditions where humidity levels touched a stultifying 94%, it was difficult to read too much into a one-sided, stop-start affair.

Their fitness was vastly superior to a flagging Baa-Baas outfit, and despite some rustiness in the first half-hour, the Lions took a reasonable percentage of their try-scoring chances.

A dominant scrum also earned them a string of penalties, while the line-out improved after some early wobbles and the defence was impressively resolute.

Farrell kicked his opening penalty after two minutes, but the England fly-half then enjoyed some uncomfortable moments, a sliced clearance and a kick charged down by his opposite number Nick Evans preceding the first controversial moment of the tour.

Barbarians hooker Schalk Brits took exception to Farrell holding onto his jersey at a ruck and launched a swinging left arm into the Englishman's face. Farrell, unwisely perhaps, responded but fortunately didn't connect.

Referee Steve Walsh, who had initially awarded the Baa-Baas a penalty, reversed it after referral to his television match official, and sent Springbok star Brits to the sin-bin.

But the Lions were unable to profit from their man advantage. Wing Sean Maitland showed good pace to almost reach a kick to the left corner from the lively Davies, but Barbarians full-back Jared Payne just reached it ahead of the New Zealand-born Scot.

The Lions then won a penalty at a scrum 10 metres from the Baa-Baas line, but Farrell pulled it wide.

"The Lions were made to sweat - profusely - in the energy-sapping conditions, but ultimately it was a job well done and a satisfactory start to the tour. Some tries went begging, but a 51-point margin was ultimately impressive, despite the Barbarians' limitations. Just as importantly, the tourists suffered no further injury setbacks. They are up and running, and the cooler climes of Australia await."

The staccato nature of the contest continued with every scrum in the first half resulting in a free-kick or penalty for the Lions, Farrell kicking the Lions 6-3 ahead from one.

After the impressive Richie Gray's pass just eluded Stuart Hogg metres from the line, and O'Connell cut inside rather than releasing Maitland in space outside him, the Lions got their opening try in the 28th minute.

After a series of pick-and-drives, Phillips appeared to have stretched over. But after the scrum-half was held up by Sergio Parisse, captain O'Connell burrowed through, the try awarded after referral to the television match official.

But minutes later Phillips did get his reward, powering through a gap and holding off Bayonne team-mate Joe Rokocoko's tackle to score.

Farrell converted both tries, and a sweetly struck long-range penalty with the last kick of the half gave the Lions a comfortable 23-3 interval lead.

The Lions' line-out showed signs of rustiness in the first half, but Richard Hibbard found Lydiate at the tail with a perfect throw on the resumption, and the flanker's tap down saw Phillips dummy and sprint through for his second try.

Justin Tipuric - after a sweet offload from Mako Vunipola - was denied a try by Rokocoko's superb tackle, and the Lions might have scored one of the great tries in their history after a length-of-the-field counter attack, only for Farrell's try-scoring pass to Maitland to be intercepted.

Instead, after a poor pass from Farrell to Davies gave the Baa-Baas a first sniff, Rokocoko stretched his legs, stood up Toby Faletau and released replacement Fotuali'i for a try.

But it was a brief riposte, Davies pouncing for a poacher's try immediately, before Faletau and Jamie Roberts sent Cuthbert racing in for the fifth.

The giant Wales wing celebrated his first outing since 16 March with a second score after a smart break from Irish replacement scrum-half Conor Murray.

Amid a flurry of changes on both sides, James Hook came on for the Barbarians to become only the second player - after Riki Flutey - to play for and against the Lions in the professional era.

But that was just a historical footnote to an occasion lacking in vibrancy and atmosphere, with Lydiate and Jones strolling over for late tries.

The Lions will leave Hong Kong - with some relief, one imagines - on Sunday evening to fly overnight to Perth, where they begin their Australian tour with a match against Western Force on Wednesday.