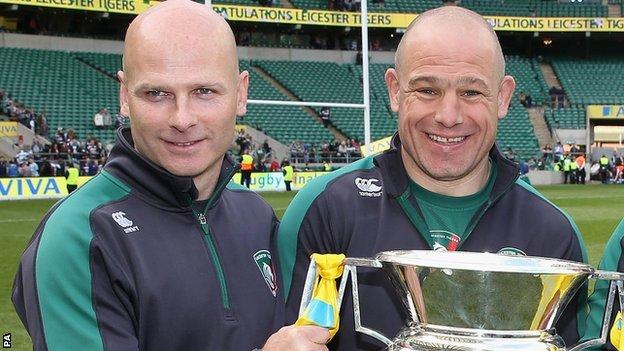 Paul Burke will take over as Leicester backs coach next season following a reshuffle by director of rugby Richard Cockerill at Welford Road.

They will both work alongside Cockerill and assistant forwards coach Richard Blaze as Leicester look to build on Saturday's record 10th Premiership title.

"Paul Burke has been learning his job as an assistant coach over the last five years here," said Cockerill. "He is very experienced in the game in a number of different environments.

"Geordan obviously knows Leicester Tigers very well, he knows and understands the game at the very highest level and has a wealth of experience and knowledge to pass on to others.

"He has enjoyed a very successful and lengthy playing career and we believe he can become a top-class coach.

"By bringing Paul and Geordan together in the coaching team we have a degree of continuity.

"Richard Blaze has done an excellent job on the coaching side since he had to retire as a player at a very young age.

"As coaches we all bring different things to the table and it is important to have a strong coaching team who all work together and all have an input."