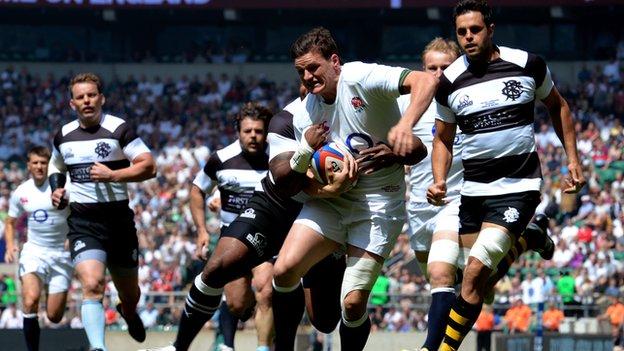 Freddie Burns scored 20 points for England as tries from three debutants secured a 40-12 win over the Barbarians at Twickenham.

Burns's try came inside a minute as England dominated in their final match before a summer tour of South America.

Rob Webber captained England in the absence of nine players away on club or British and Irish Lions commitments.

First-team regulars Owen Farrell and Manu Tuilagi were among those on Lions duty, prompting Stuart Lancaster to field a team containing nine players under the age of 24.

While the game was classed as an uncapped international, it was England's first chance to shine since their 30-3 mauling at the hands of Wales in the final round of the Six Nations.

After less than a minute, Barbarians' captain Mike Tindall was turned over close to the halfway line, allowing England to release the uncapped Yarde. He offloaded to Burns who scored the try and converted.

Wasps wing Wade bravely collected an up and under ahead of American Takudzwa Ngwenya, with the England man conceding a five-metre scrum late in the period.

But England comfortably defended Imanol Harinordoquy's drive for the line, taking a 16-0 lead into the interval.

At the restart, London Irish wing Yarde, 20, scored a superb individual try, breaking a challenge just inside the Barbarians half to power to the corner.

Kyle Eastmond came off the bench to become the second non-capped player to score for the home side, and an end-to-end attack started by Billy Twelvetrees allowed the pacy Wade to duck two challenges and register his own debut try.

Five minutes later, Twelvetrees bundled over for his own try, to make it 40-0.

In the final 10 minutes, Schalk Brits touched down in the corner for the Baa-Baas, before Elliot Daly, who was overlooked for England's summer tour, scored late on.