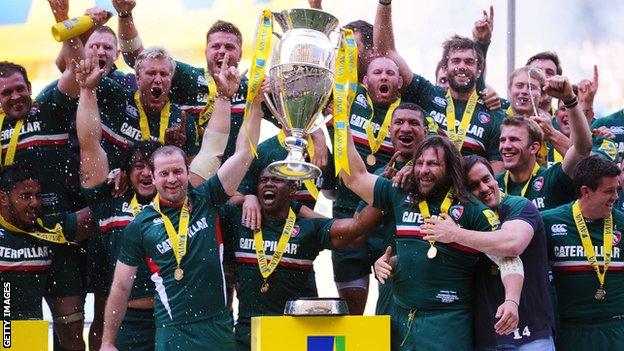 Leicester won a tempestuous Premiership final to secure their 10th English title against a Northampton side who had captain Dylan Hartley sent off.

His side were 13-5 down by that point after Niall Morris crossed for Tigers and Stephen Myler scored for Saints.

Ben Foden and Lee Dickson touched down either side of Graham Kitchener's score but Tigers finished off with tries from Manu Tuilagi and Vereniki Goneva.

Saints may have contributed to their own downfall but Leicester's dominance of English rugby in the professional era continues, having now won a record number of titles and appeared in nine successive finals.

"Dylan Hartley will now have to face an RFU disciplinary hearing. I do not think he will be able to board the plane to Hong Kong with the Lions on Monday. It will be Tuesday at the earliest before his case is heard and you would think a ban will come too. This story is far from over - his Lions place is in real jeopardy."

Jim Mallinder, more familiar with watching his Northampton team dumped out at the semi-final stage, as has been the case in the past three years, was forced to witness a gutsy performance from the Franklin's Gardens club undone by his captain's temperament.

And Hartley may feel the repercussions of his sending off - the first in a Premiership final - for some time still, as he will now miss this summer's British and Irish Lions tour should he receive the entry level six-week ban for offensive language.

Northampton's implosion occurred on the cusp of half-time, triggered when Myler mistakenly believed he could kick to touch from a 22 drop-out and conceded a scrum, which resulted in a Leicester penalty.

Hartley, already on a warning for arguing with referee Wayne Barnes, was shown a red card for offensive language and, according to the official, calling him a "cheat".

Thirty-five minutes before that Tigers had started strongly when Toby Flood, having already kicked an early penalty, received the ball in the Saints half after a swift Tigers break, and looped it out for Morris to cross in the corner.

Saints could have crumbled under Leicester's early persistence, but pressed Tigers into their own 22 and saw Ken Pisi stopped just short of the try line.

But they were on the scoreboard moments later - Myler taking in a pass after quick work from Dickson and Luther Burrell to squirm over and touch down, although the fly-half missed the conversion.

Leicester boss Richard Cockerill was left fuming when Flood was caught late by a Courtney Lawes tackle that left the England number 10 down for some time.

And Lawes, fortunate not to be sin-binned for that offence, once again flattened Flood, who had to stumble off with concussion and was replaced by George Ford.

Flood's bruising seemed to upset Leicester's rhythm and Saints pinned back their rattled opponents, but Cockerill's men broke through when Mathew Tait forced Saints into conceding a penalty, which was dispatched by the boot of Ford.

Saints came within inches of a second try, but Tigers were let off when the television match official decided the foot of Foden, under pressure from Kitchener, had gone out of play before the full-back managed to force the ball to the ground.

To get this far and not to win it is an opportunity missed so thankfully this year, third time lucky, it's done

And Ford made them pay when, after the dust had settled on Hartley's dismissal, he further increased the Saints's despair by placing his penalty between the posts to hand his side an 11-point lead at the break.

Re-emerging with 14 men, Saints burst into life when good work from replacement Mike Haywood freed Foden to touch down.

With gaps appearing and the game opening, Kitchener barrelled through to press home the Tigers's advantage and, even though Ford missed the extras he landed a penalty moments later.

Mallinder's men, perhaps recalling the agony of a final defeat against Leinster in the Heineken Cup two years ago, refused to be overwhelmed and were back in it once again when Burrell found Dickson, who finished.

Myler put the conversion over to draw Northampton within seven points of Leicester, but Tuilagi burst through a tiring Saints defensive live for a simple try and Steve Mafi did well to keep the ball alive on the sideline before handing over to Goneva to cross.

And Ford slotted over his fourth penalty on the final whistle to confirm a first title since 2010 for Leicester.

"It was a bit of a rollercoaster. We started the game really well, scored a good try and then obviously we were a bit sloppy, let them back in and then it was really tight.

"In the second half we just didn't control the ball well enough in the early parts. The scored a good try, even with a winger down, so credit to Saints - they played really well, they took us to the line but eventually we wore them out.

"To get this far and not to win it is an opportunity missed so thankfully this year, third time lucky, it's done."

On the sending-off of Northampton's Dylan Hartley:

"You don't want blokes getting sent off. People say things in the heat of the moment. Has it spoilt the game? Yes and no but, to be fair to Saints, it didn't affect them particularly."