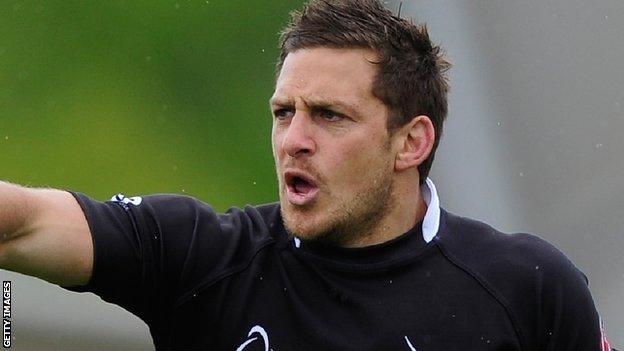 Fly-half Jimmy Gopperth says Newcastle Falcons can relish their two-legged Championship play-off final against Bedford despite having the pressure of promotion to the Premiership at stake.

Falcons can return to the top tier at the first attempt with victory, following relegation last term.

"You so badly want to get to the final and now we're here we can relax and enjoy ourselves and ensure we perform."

He added: "I've been involved in a few big games throughout my career, they're the ones you strive for and love to play in, it's why we play rugby to get ourselves into these opportunities to win silverware."

Leeds gave the Falcons a scare in the last four, winning with a late converted try at Headingley, but Dean Richards' side overturned a five-point deficit in the second leg to book their double date with Bedford.

Newcastle Falcons will lose the services of their metronomic Kiwi kicker at the end of the season, as he heads for the Amlin Challenge Cup winners.

"I've absolutely loved my time here, it's been a great place to live and the people right throughout the area are accommodating and friendly," Gopperth said.

"I'm not an emotional person but who knows [if I will get emotional].

"Hopefully I'm lifting the trophy at the end of the day."

Gopperth's five penalties were crucial to the success, as was the big-game mentality generated by international players such as Italy lock Carlo Del Fava and Scotland's Ally Hogg and Scott MacLeod.

"We're pretty well balanced with experience, a lot of internationals and guys who have been there and done it," he continued.

"Hopefully collectively we can really get together, block the eternal pressures and concentrate on our own game, go out enjoy ourselves and perform."

Despite the best efforts of current Bath coach Gary Gold, who restored pride and even took their survival bid to the final day, Falcons dropped into the second division but under director of rugby Dean Richards, their bid to return has been relentless with only one defeat in regular season league games.

"The north east is a huge area and the way this club has changed the last few years we have to be a Premiership club," Gopperth said.

"Right from the players and the coaching staff, everyone deserves to be back in the Premiership and it's down to us to do the things that will put the club there."

The first leg takes place at Bedford's Goldington Road ground on Thursday with the return at the Falcons' Kingston Park next Wednesday 29 May.