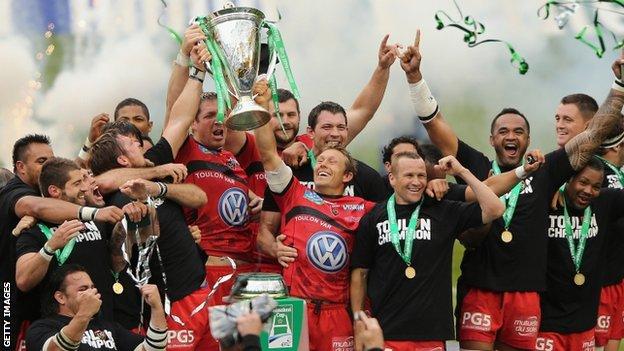 Jonny Wilkinson added the Heineken Cup to his long list of achievements after he kicked 11 points to help Toulon beat Clermont Auvergne in Dublin.

A penalty apiece for Wilkinson and Morgan Parra was all there was to show from an uninspiring first half.

Former England outside-half and ex-Northampton coach Paul Grayson on BBC Radio 5 live: "I was critical of Toulon in the first half but when it came down to the last five minutes they were faultless in defence. The weight of their tackling kept Clermont out. They weren't the best team, they had to hang in there, but they found a way to win. Wilkinson was faultless off the tee and ultimately that made the difference."

But Delon Armitage scored in the corner to give Toulon hope and the trusted Wilkinson kicked his side to victory.

"It's up there because it's all that I've got," said Wilkinson when asked to compare adding the European trophy to the World Cup, Six Nations titles and Grand Slam he has already won.

Clermont were the more imaginative during the 80 minutes, but Toulon's masterful defence, and Wilkinson's radar, was enough to ensure the team from the Mediterranean won their first major trophy in 20 years.

"It's written in history now," added the 33-year-old Wilkinson as his tearful team-mates celebrated on the pitch.

"We've worked so hard together. It takes everything you've got and in the end you get the rub of the green. It's such a good feeling."

Three penalties, a conversion and a charge down, as Clermont attempted a drop-goal in the final two minutes, will only add to Wilkinson's popularity on the Cote d'Azur.

The outside-half is already on the European Player of the Year shortlist thanks to his performances in the quarter and semi-finals of this competition.

He was not the only Englishman celebrating in Dublin, however, as Armitage, his brother Steffon, Andrew Sheridan and Nick Kennedy all played a part in Toulon's victory, while Gethin Jenkins became the ninth Welshman to win the Heineken Cup.

Many had predicted a final where attritional forward play would hold sway over creativity and flair, and so it proved in the first half.

Morgan Parra, the man with an 83% success rate with the boot in this competition prior to kick-off, gave Clermont a 3-0 lead in as many minutes with a long-range penalty.

Wilkinson, though, was soon given a chance to take aim at the posts when Clermont infringed at the breakdown and the outside-half duly levelled.

Toulon were ferocious in defence, with Mathieu Bastareaud a particularly effective roadblock in midfield, which perhaps explains why Clermont were unable to create try-scoring chances despite monopolising possession.

James went closest to crossing the line in the first half when the outside-half chased his own chip ahead from turnover ball.

The Australian outsprinted the Toulon defence, but a try was disallowed because the ball had crossed the deadball line.

James and his team-mates cut frustrated figures as they departed the field at the break, but they were celebrating within a minute of the resumption.

Clermont secured turnover ball and Nalaga, released by captain Aurelien Rougerie, dashed down the left wing to dive over for the opening try of the match.

Welshmen to have won Heineken Cup

Parra failed to convert from the touchline and Clermont's lead was soon reduced to two points, Wilkinson slotting another penalty in the 45th minute as the match came to life.

James delicately chipped ahead for Rougerie to gather and the centre popped an inside pass to his supporting outside-half, who sprinted clear to score underneath the posts, giving Parra a simple conversion for a 15-6 lead.

Toulon crept to within a converted try of their opponents thanks to a 25-metre penalty from Wilkinson.

And on the hour Juan Martin Fernandez Lobbe brilliantly stole the ball at the breakdown and floated a pass to Armitage, who scored a breakaway try in the corner.

Wilkinson successfully negotiated a tricky conversion to secure his team a match-winning 16-15 lead.

Clermont were camped in the Toulon half in the final 10 minutes and, in the 78th minute, they manoeuvred themselves into drop-goal territory but the charging Wilkinson blocked David Skrela's attempt.

Toulon coach Bernard Laporte: "You are asking yourself questions but defensively we never gave up. Our first feeling is tremendous joy and I would like to congratulate our players. I am proud of them."

Clermont Auvergne head coach Vern Cotter: "We got penalised and then lost the turnover and it was a try. We had the ball in their half for the last 10 minutes and it is very frustrating not to be able to come away with a better result than that."