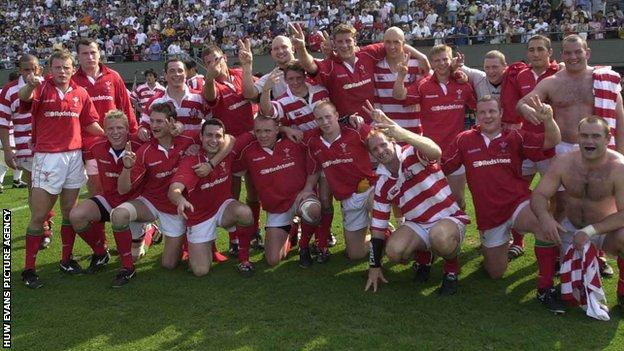 Nobody needs to tell Tom Shanklin how important a Wales tour to Japan is when the British and Irish Lions are in Australia.

The double Grand Slam winner made his Wales debut in Tokyo in 2001, scoring two tries in a 53-20 victory over Japan while the eyes of the rugby world were on Graham Henry's Lions down under.

Again in 2013 Wales head to the land of the rising sun for a two Test tour for the first time since 2001 while the Lions, including a contingent of 15 Welsh players, are back in Australia.

"Shanks" followed in his father Jim's footstep when he pulled the famous red jersey on for the first time, and was one of eight young players who toured Japan 12 years ago who went on to become Grand Slam winners and household names in the following years.

Centre Shanklin, who would retire with 70 caps in 2011 following a fourth knee operation, was a mainstay of Wales' first Grand Slam success for 27 years in 2005 and would win a second Grand Slam in 2008.

"You look back on that tour and that group of players stayed together and was the backbone of the Grand Slam-winning side," said Shanklin.

While many Welsh rugby supporters may be consumed by the British and Irish Lions led by Wales coach Warren Gatland in Australia, it is clear what happens in Osaka and Tokyo could have a big bearing on the national side over the next few years.

They have big boots to fill, with so many frontline Welsh internationals away with the Lions, but they have clearly been singled out as players who have the raw talent and temperament to make the grade at international level.

Shanklin, who was playing for Saracens in the English Premiership when he was called up by Wales, was in the same boat 12 years ago, but his first tour was far from plain-sailing and was an eye-opener for most of the young players in the squad.

Wales suffered a shock 45-41 defeat to Japanese champions Suntory in the first game of the five-match tour but rallied to record a comfortable 64-10 victory in the first Test in Osaka. Shanklin did not feature in that win and feared his chances of a Wales cap were slipping away.

He then played for Wales in the midweek 38-16 defeat to Pacific Barbarians and even his father Jim was convinced his son's hopes of making his Test debut were over.

"I was quite happy and excited that he was on the tour but your trying to follow it from the distance," said Shanklin senior.

"All I knew was that he had played in the midweek game and I looked at the result and they had been hammered and I thought Tom was not going to play in the second test.

"Then I get this phone call to say he's playing and that took me back a bit and I wasn't sure what to do."

Jim did what any Welsh father would do when he found out his son had been selected on the wing for his first Wales cap - he jumped on the next flight and flew the 6,000 miles to Tokyo to see Tom score two tries in the win over Japan.

Shanklin senior, who won four Wales caps between 1970 and 1973, admits watching his son win his first Wales cap had a profound impact on him and changed his view that Test caps should not be awarded for games against lesser nations.

"I don't know whether it was Tom's tour that changed my mind, but I was against cheap caps for your country," said Jim.

"There's a lot of players that have been capped this way and you've never heard of them again. I always thought that was wrong, but when you look at it there's probably far more who have been introduced to the national team that way and gone on to have glittering careers.

"I think the upside is far better than the downside."

Captain Bradley Davies and his new-look Wales squad should be under no illusions about the marker laid down by the previous Welsh tourists to Japan.

In Japan back in 2001, Shanklin and company took the first steps towards playing their part in helping drag Welsh rugby out of the doldrums.