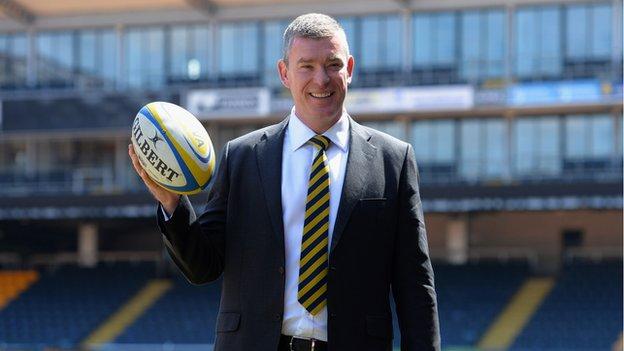 New Worcester Warriors director of rugby Dean Ryan insists that there is no miracle cure to automatically transform the Premiership outsiders into Heineken Cup challengers.

Ryan's predecessor Richard Hill, who won promotion back to the Premiership in 2011, paid with his job for his failure to earn a top eight finish.

But Ryan told BBC Sport at Sixways: "I'm not going to promise anything.

"I'm not naïve enough to think I can come in here with a magic wand."

After inheriting a team who, although never seriously threatened with relegation, could not finish the season fast enough, Ryan has also taken on his predecessor's pre-planned signings for next season.

Eight new players have already been lined up to report for pre-season training at Sixways next month, to help transform the fortunes of a team who ended up 11th in the table, which would have been joint bottom place, but for London Welsh's mid-season 10-point penalty.

And, on the day he was finally introduced to the local Midlands media, almost three weeks after his curiously-timed appointment, Ryan, back in Premiership rugby for the first time since leaving Gloucester four summers ago, is already warning that there will be no quick fix.

"Now is not the time to throw things around, for making signings and huge changes," he told BBC Hereford & Worcester.

"We've got to make sure we get the structures right.

"I don't think there's a simple answer otherwise it would have been found before and it would be naïve to think there is.

"It is about breaking a cycle of operating in that bottom three or four clubs."

Ryan also admits that, having taken on a part-time coaching role with Scotland during this year's Six Nations, it was the persuasive skills of Warriors owner Cecil Duckworth that played a part in swapping his comfy chair in a TV studio for the Sixways hotseat.

"Right from the outset, to come back into rugby was about finding something that excited me," said Ryan.

"In my own head I got to a place where I thought I was going to carry on with TV.

"I didn't really see a challenge that lit the fire back inside but I think conversations with Cecil were something that started to do that.

"I felt that, if I I didn't do it, it might eat away at me further down the line."