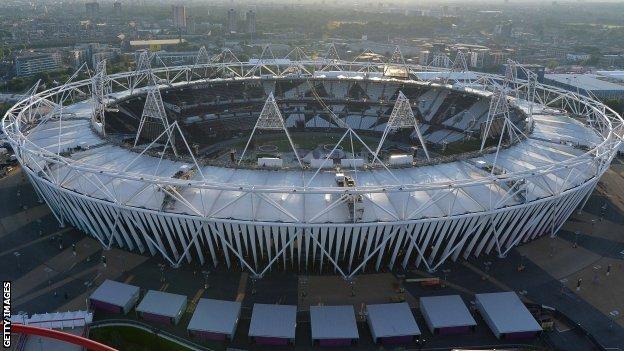 London's Olympic Stadium will host five games at the 2015 Rugby World Cup, which is being held across 13 venues.

Twickenham will host the opening match of the 20-team event on 18 September, with hosts England taking on the winner of the Oceania qualifying competition.

Eight football stadiums, including Wembley and Villa Park will be used.

Rugby Football Union (RFU) chief executive Ian Ritchie said: "It is truly a national event that the game and the country will feel a part of."

Cardiff's Millennium Stadium, Kingsholm in Gloucester and Exeter's Sandy Park are the only other rugby venues.

The World Cup has been seen as a unique chance to 'spread the gospel' of rugby in England, and reach new audiences away from the sport's heartlands. It may come a surprise then that just six of the 48 matches will be played in the north, and almost half in the south-east including 17 in London. This, and the fact that only two club rugby grounds are being used, is evidence of the pressure organisers are under to sell more than two million tickets, and make the £80m which the International Rugby Board has been promised. The withdrawal of Old Trafford as a venue hasn't helped of course, hence the importance of the Olympic stadium as a host for five matches.

International Rugby Board (IRB) chairman Bernard Lapasset said: "The Rugby World Cup is very special. It's not a football stadium or a rugby stadium, it's a stadium for the Rugby World Cup."

The Olympic Stadium will host pool games involving South Africa, New Zealand and France, as well as hosting the match between Ireland and Italy on Sunday, 4 October.

The bronze match, on Friday, 30 October, will also be played at the east London stadium.

The 82,000-capacity Twickenham will host 10 games, including three of England's four pool games, two quarter-finals, both semi-finals and the final on Saturday, 31 October.

England will play their final pool game, against a qualifier, at Manchester City's Etihad Stadium.

The Millennium Stadium will host two of Wales' pool games and two quarter-finals among its eight games.

Wales open their campaign in Cardiff on Sunday, 20 September against a qualifier, before taking on England at Twickenham the following Saturday.

Scotland play their opening game at Kingsholm on Wednesday, 23 September before their next game four days later at Leeds United's Elland Road.

The 13 venues were selected from a long list that was announced in October 2012.

Sandy Park and the Etihad Stadium were added to the list after Manchester United's Old Trafford stadium was withdrawn.

Each pool will be made up of five teams, so there are still eight places to be filled.

The tournament's organisers, England Rugby 2015, must sell 2.9 million tickets to cover the £80m guarantee owed to the International Rugby Board.

England Rugby 2015's chief executive Debbie Jevans said: "It is a great mix and will ensure that 92% of the population is within 50 miles of a World Cup venue.

"We're confident we're going to be able to honour the minimum access prices that there were and that's certainly a commitment to us to be able to do that.

"We really wanted to take England to the north west and we are delighted Manchester City came to the table.

"We want 2015 to remembered as a rugby year, the Rugby World Cup, and to create a generation of rugby heroes and role models."

Twelve teams have qualified for the finals - Australia, England and Wales in Pool A, South Africa, Samoa and Scotland in Pool B, New Zealand, Argentina and Tonga in Pool C and France, Ireland and Italy in Pool D.

Each pool will be made up of five teams, meaning there are eight places to be filled via a series of qualifying matches which will be concluded in 2014.