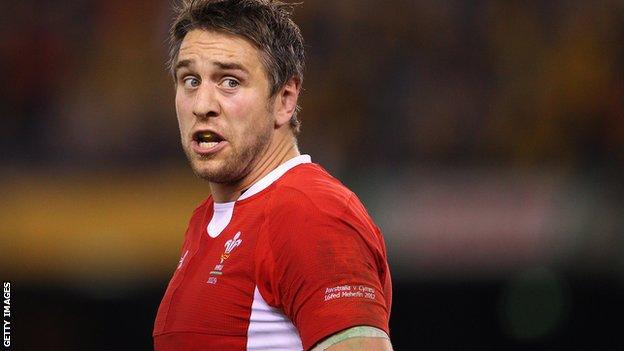 Ryan Jones will be rested this summer, according to interim Wales coach Robin McBryde.

The Ospreys back row star was not named in a 32-man Wales training squad for the forthcoming tour of Japan.

However, McBryde said that missing the tour would not affect the players' chances of being put on standby for the Lions in Australia.

"[We have] had the assurance ... that by omitting them from this squad their selection as standby players for the Lions is in no-way affected," said McBryde.

He said that has enabled the Welsh management to pick a less experienced squad with one eye on the future.

"Having had that assurance we decided to go and develop these youngsters and take them on to the next level," he said.

Cardiff Blues lock Bradley Davies is included in the squad, after missing out of on the whole of the 2013 Six Nations tournament with an ankle ligament injury.

And Rhys Priestland returns after missing most of the season with an Achilles tendon injury.

There are 11 uncapped players as well as 15 who were part of the 2013 Six Nations squad.

Wales play Japan in Osaka on 8 June and Tokyo on 15 June.

London Irish's Scarlets-bound fly half Steven Shingler is included in a Wales squad for the first time since the IRB ruled he could not play for Scotland.

McBryde, who takes the helm with head coach Warren Gatland, attack coach Rob Howley and kicking coach Neil Jenkins on Lions duty, said the squad has "a good blend of experience and youth."

He added: "The importance of this tour [is] with a view of looking ahead primarily to the next World Cup.

"Having said that, it isn't a development tour. This is the main Welsh tour to Japan and it's a threat and a challenge that we are taking very seriously.

"It will be a challenge for this young team and because of that we need to encourage leaders among this team, which is why perhaps you're not seeing some more experienced names on that squad list."

On Tuesday, 15 leading Welsh players were named in the British and Irish Lions squad to tour Australia.