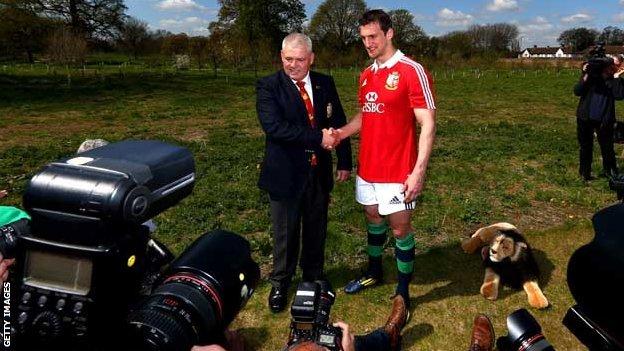 Wales' Sam Warburton will lead the British and Irish Lions on their 2013 tour to Australia.

He is among 15 Wales players picked by Lions head coach Warren Gatland.

Warburton is the first Welshman to be named tour captain since fly-half legend Phil Bennett, who led the 1977 party to New Zealand.

Former Wales captain Gareth Thomas also led the Lions in New Zealand in 2005, but as a replacement for Ireland's Brian O'Driscoll, who left the tour injured in that year's first Test.

Cardiff Blue Warburton becomes the youngest Lions captain since 1955 at the age of 24.

Toulon prop Jenkins will make his third Lions tour, having been in Sir Clive Woodward's party in New Zealand in 2005 - a tour that ended in a humiliating 3-0 whitewash.

Jenkins was joined by Ospreys Adam Jones, Alun Wyn Jones, Blues Roberts and Halfpenny and Bayonne's Phillips in South Africa in 2009 when the tourists restored the Lions' reputation in a 2-1 series loss.

Of the leading Wales players who helped secure a second successive Six Nations title, culminating in 2013 in a 30-3 win over England, Ospreys Ryan Jones and Dan Biggar miss out with the latter the only one absent from the side that started the final game at the Millennium Stadium.

There is also no place for Bath prop Paul James as Saracens' Matt Stevens comes in as the utility prop despite having retired from England Test duty.

Lydiate's inclusion comes after recovering from a broken ankle that ruled him out of the Six Nations.

In his absence Tipuric secured his place on the Wales open-side, forcing interim Wales coach Rob Howley to move Warburton to blind-side.

That selection was among the issues that prompted a pre-announcement debate over Warburton's Lions credentials.

BBC pundit Jeremy Guscott and ex-Wales fly-half Gareth Davies were among those who argued Warburton should not be given the captaincy in the belief he is not certain of a Test starting spot.

422 comments
Back to top
unknown