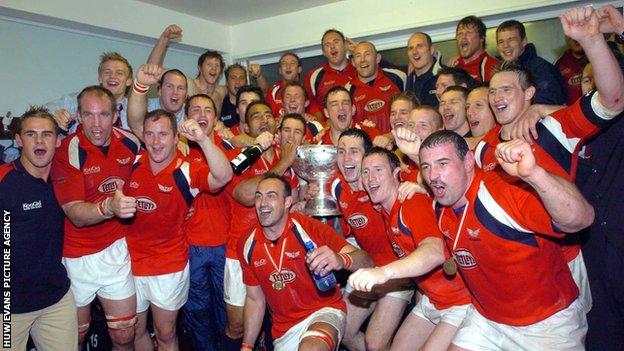 After almost a decade without winning a major trophy, the Scarlets are looking for a chance to recapture former glories by bidding to make the Pro12 play-off semi-finals when they take on Treviso at Parc y Scarlets on Friday.

But it has been a rocky road for a part of Wales which regards itself as heart and soul 'rugby country'.

The Scarlets looked poised to be one of the dominant forces of the new-style Celtic League when they won the inaugural title in 2004.

They beat Ulster 23-16 at the old Stradey Park on a balmy May evening to become the first Welsh side to win a cross-border competition and looked ready to become one of the major powers in the newly-created tournament, which expanded and has now become the Pro12.

Coach Gareth Jenkins appeared to have blended together the perfect mix of international players, seasoned professionals and exciting youngsters.

The Scarlets' future looked secure, but soon retirements and departures would leave them adrift of the league's big guns and they have spent a large part of the last decade staring into the abyss.

They would be runners-up in the now defunct Celtic Cup in 2005 and the Anglo-Welsh Cup in 2006 and Phil Davies, now in charge of the Cardiff Blues, would be the last Scarlets coach to guide the team to a Heineken Cup semi-final in 2007.

To make matters worse, the Scarlets have also had to watch their arch-rivals the Ospreys become the most successful side in the tournament, winning four league titles and an Anglo-Welsh Cup in 2007.

They have even had to watch the Cardiff Blues win an Anglo-Welsh Cup in 2009 and become the first Welsh side to win an European trophy when they lifted the Amlin Challenge Cup in 2010.

For the Welsh region which fought so hard to stand alone at the advent of regional rugby, the Celtic League title of 2004 became their only major success.

In the meantime, the Scarlets became embroiled in one issue after another, including funding, financial, crowd and planning issues around the move from Stradey to their new £23m Parc y Scarlets stadium and, very recently, the sale of Wales wing George North to Northampton Saints at the end of the season.

But now coach Simon Easterby, who was part of the side to lift the trophy back in 2004, and his side have a chance to get people talking about the Scarlets' re-emergence, where it really matters, on the field.

The Scarlets have a chance to take a major step to re-establish themselves as a genuine force in Pro12 rugby with a victory over Italian outfit Benetton Treviso on Friday night.

The Scarlets class of 2013 have some way to come close to the class of 2004, when you think the latter included Easterby, Scott Quinnell, Stephen Jones and a young Mike Phillips at half-back, Mark Taylor, Robin McBryde, Chris Wyatt and Salesi Finau.

Nobody would claim they are favourites to win this season's Pro12, but the fact they could finally finish in the top four and are on course to secure a semi-final play-off place for the first time is a sign of real progress for them.

There is now a chink of light and a chance to build on the Scarlets legacy.

It would also be the first tangible reward for the change of emphasis at the Scarlets in the last few seasons and the return to their roots and their efforts to reinvent themselves and rediscover the values that made them more than a rugby side and more a cause, like Munster, for those who follow them.

North is not the first big name to leave the Scarlets - Ieuan Evans, Scott Quinnell, Stephen Jones and Dwayne Peel have all left for pastures new. The loss of all of those Wales and Lions stars was billed as a disaster but, of course, it was not.

While North's departure may have caused much gnashing of teeth, the reality is that his sale is a glowing endorsement of the conveyor belt in place at Parc y Scarlets and the quality of the talent now being produced by the region.

North will be hoping to emulate fly-half Jones, who left the Scarlets to join Clermont Auvergne in France on a high by leading them, thanks to 18 points from his boot, to the inaugural Celtic League title.

It would be fitting for North if he signed off by securing the Scarlets' first piece of silverware since then.