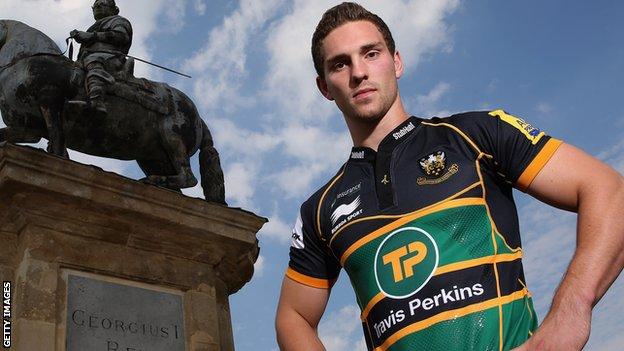 He has 12 tries from 31 Test caps for Wales, two Six Nations crowns, including a Grand Slam, and the try of the series in this year's successful British & Irish Lions tour of Australia - all by the age of 21.

North's arrival from Scarlets in the summer - coupled with the signings of England and Lions prop Alex Corbisiero and Samoa fly-half Kahn Fotuali'i - have given the Northampton contingent belief that last season's Premiership final defeat by Leicester is a precursor to greater achievements.

The trio join a glittering array of players who have shone at Franklin's Gardens in the past. Former Saints Ian Hunter, Lennie Newman and David 'Piggy' Powell have joined BBC Radio Northampton commentator James Knight in picking out four of the best.

There were honourable mentions for others, including Allan Bateman, Bruce Reihana and Soane Tonga'uiha - but only four could make the final cut.

Blowers was a hugely committed and fearless player for Saints and New Zealand - although many believe he should have had more opportunities at international level than his 18 appearances.

Andrew was athletic, skilful and tough as nails

He was also active in the local community, organising a food collection for homeless and socially disadvantaged people in Northampton. He played with Toyota in Japan, the Highlanders and Auckland and latterly Bristol. He retired in 2009 and returned home to New Zealand.

"Wayne Smith signed Andrew Blowers at his prime and just as he was establishing himself as an All Black," says Newman, a former team manager and forward at Franklin's Gardens.

"He is the only player I have known to have been world class in all positions in the back row. At just under 6ft 6in and 18 stone, he was athletic, skilful and tough as nails.

"He was renowned for his huge tackles and he was a sure bet in the Premiership dream team every season he was at the Saints."

Lam won 34 caps for Samoa and famously helped Saints to win the Heineken Cup in 2000. He had left Newcastle just a month after winning the Premiership title in June 1998.

Pat proved to be the missing piece in the jigsaw

"Already an established star for Newcastle and Samoa, he proved to be the missing piece in the jigsaw," says Knight.

"Hugely popular with the fans, his leadership skills drew together a talented squad hitherto seen as underachievers, and fittingly was the man who lifted the trophy at Twickenham.

"The courage shown when playing in both semi-final and final while injured typified the man."

Hunter agrees that Lam raised the standards at Franklin's Gardens.

"The way guys from Samoa and New Zealand committed to rugby was different to us," says the former Saints and England full-back.

"It wasn't just what Pat did on the pitch, it was what he did to get to that level that made him hugely instrumental."

"Without doubt, Garry was the most feared prop in the Premiership while at the Saints," says former Northampton player and manager Newman.

The South African won the World Cup in 1995 and arrived at Saints to help the club do more than just survive on their return to the Premiership.

You didn't pick a fight with Garry Pagel

He had impressed for Western Province against the British & Irish Lions. Sir Ian McGeechan - then both Lions head coach and director of rugby at Saints - moved quickly to bring him to Franklin's Gardens.

Pagel was a force in the front row for Saints as they won the Heineken Cup by beating Munster in 2000. These days, he is a farmer in South Africa.

"He had some big boots to fill but he did just that," adds Newman. "He was humorous and boisterous off-field and hard and uncompromising on it.

"I genuinely saw fear in the faces of opposition props as they walked on to the field and relief as they came off - usually well before Garry did."

Hunter played for a couple of seasons with Pagel and says he was a big influence for everyone in the squad.

"No quarter was given," he says. "He played hard and trained hard and he expected the same from everyone in the team.

"He was a quiet guy with incredible technique at the scrum, but he was also a hard man. He gave people a torrid time in the front row and he played through the pain barrier.

And Powell, who is still friends with Pagel, says the South African was "quite outstanding".

"You've got to have an enforcer," Powell says. "You didn't pick a fight with Garry."

"Buck Shelford was a class act in a different era," says Newman.

The signing of New Zealand star Wayne Shelford was a big surprise. Saints were in Division Two and Shelford - the unbeaten captain of the All Blacks between 1987 and 1990 - inspired the club's staff and players. David Powell credits him with "instilling a professional attitude into the club".

"With the rugby laws as they were at the time, he was able to control everything from number eight," Powell says.

"He was an outstanding person - very morally correct - and a great leader.

Although John Olver was the club's captain, Shelford was an influential voice - and his attitude towards preparation, training and playing is still well remembered by fans and former players. Matt Dawson, Tim Rodber and Martin Bayfield might not have flourished but for Shelford's arrival.

"His signing was hugely influential," says Hunter. "On and off the field, in the growth of the club, but also in the development of a number of leading players who went on to long and established careers for the British & Irish Lions, England and the Saints.

Shelford missed out on the 1991 Pilkington Cup final because he had returned to New Zealand to press for an international recall which did not come.

But he achieved more or less everything there was to achieve in rugby and - alongside Barrie Corless and Glenn Ross - helped transform Saints' prospects.

"He brought us so far from such a low base," adds Powell. "You can do nothing but admire Buck."