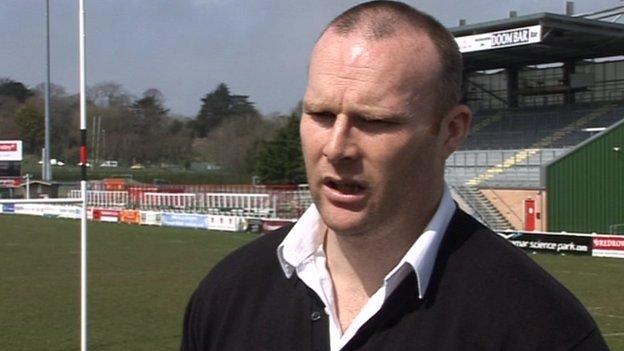 New Plymouth Albion boss James Shanahan hopes to build a link between the club and Premiership side Saracens.

Shanahan after three years at Old Albanians, where he brought in some of the Saracens young players on dual registration.

"Their primary option is Bedford as it's only an hour away," said Shanahan.

"But if Bedford's squad's full there may be options for players to potentially come down to Albion and play Championship rugby with Albion."

Shanahan has also been in charge at Cambridge and his relationship stems from his time at his former club.

"I've worked well with Saracens, not just in the three years at Old Albanians, but while I was at Cambridge I had Alex Goode who was with me who's a Cambridge boy," he told BBC South West Sport.

"I've known Saracens for about four seasons now so it's a pretty good relationship."

Plymouth's main source of dual-registered players this season has been through Premiership neighbours Exeter.

The likes of Alex Brown, Jack Yeandle, Henry Slade, Luke Cowan-Dickie and Jack Arnott have all spent time at the Brickfields this season from Exeter.