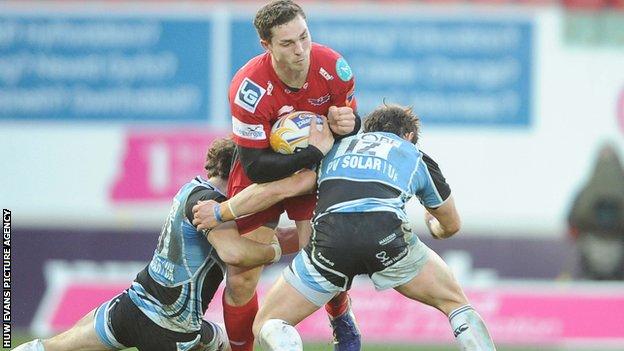 Wales wing North will leave Parc Y Scarlets in the summer and has signed a three-year deal to play for Northampton Saints in the Aviva Premiership.

North is not the only wing to leave, with Andy Fenby having signed for London Irish and Morgan Stoddart forced to retire through injury.

"It [wing] is definitely a priority at the moment," said Easterby.

It's something we are doing at the moment, but we have to obviously get quality there and that is not always available.

"It's something we are doing at the moment, but we have to obviously get quality there and that is not always available.

"There are one or two players we have spoken to recently and hopefully we can announce a signing very soon."

North, 20, had one year left on his Scarlets contract, but was unable to agree fresh terms.

And he took his tally of Wales caps to 31 by featuring in all of his country's games on the way to this year's Six Nations title.

The Llanelli-based region have previously said they sought a buyer for North after he rejected a new three-year deal.

But the Welsh Rugby Union accused the region of offering North to French clubs before the start of the year.

The accusation triggered a stinging response from Scarlets, who were supported by the other three regions in condemning the WRU for discussing North's contract situation in public.

Easterby admits the loss of all three players - North, Fenby and Stoddart who was forced to retire due to a leg injury - has left a major hole in the Scarlets squad for next season.

He admits the Scarlets have already looked at the marketplace to look at prospective wing/full-back replacements.

"We have lost Andy and we have lost Stodds [Stoddard]," said Easterby.

"And it's pretty evident we have got a little bit of a hole in the squad there."

Meanwhile, Easterby has admitted the loss of impressive fly-half Owen Williams, who will leave for the Leicester Tigers in the summer, is a blow.

The Scarlets do have Wales fly-half Rhys Priestland who is close to returning to action after recovering from an Achilles tendon injury.

While Dan Newton, Aled Thomas and new-signing Stephen Shingler from London Irish can all play at stand-off.

"We have developed him [Williams] over the last three years and he will be a loss to the region," said Easterby.

"That's not just because of what he has done in the last three months.

"He is a quality player and we have a number of players in that position already and he is somebody we would like to have held onto."