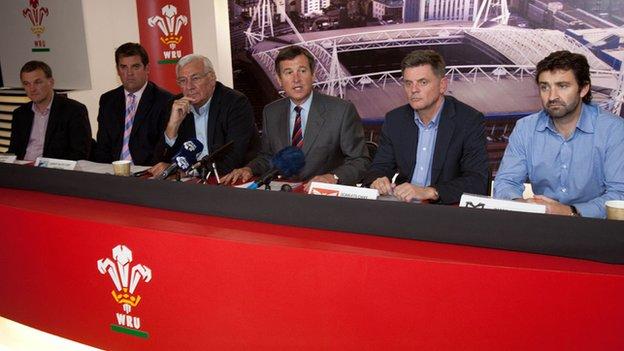 Gareth Davies says the Welsh Rugby Union and the regions need to end their dispute as quickly as possible.

The four Welsh regions have declined a WRU invitation to attend a meeting to discuss the central contracting of players.

With George North set to quit the Scarlets, Davies fears more players could be tempted to leave.

"I genuinely think the Welsh lads who come through the set-up in Wales want to stay in Wales," he said.

Davies, a former Cardiff RFC chief executive and Wales captain, added: "But under the current environment of this petty squabbling I think that certainty is under threat.

What is a central contract?

A player's contract is held by the Union and not by his club, province or region.

The Union, who pays his wages, can then determine where, when and even what position he plays.

New Zealand, Ireland, Australia, South Africa and Scotland all have their own variations of a central contract.

"I just cannot understand why we can't get around a table, in the words of the Union, and thrash it out properly through the professional board.

"People were trumpeting three or four months ago that this was a big step forward for the Welsh game. I don't see any evidence of that."

The row between the four regions and the union has been triggered by the imminent transfer of Wales wing North from Scarlets to Northampton.

That prompted the WRU to issue an invitation through a media release for the four regions to attend a "summit meeting" to discuss central contracts.

At a media conference at Cardiff Arms Park on Thursday, RRW chairman Stuart Gallacher said the regions would not be attending.

Regional Rugby Wales says it will only discuss the future of the game through the Professional Rugby Game Board.

The PRGB, comprising the four regions, the WRU and an independent chairman, was set up following a professional review of the game in Wales.

It has met only once since being formed in December 2012. Presiding judge Sir Wyn Williams was appointed chairman of the PRGB by the WRU.