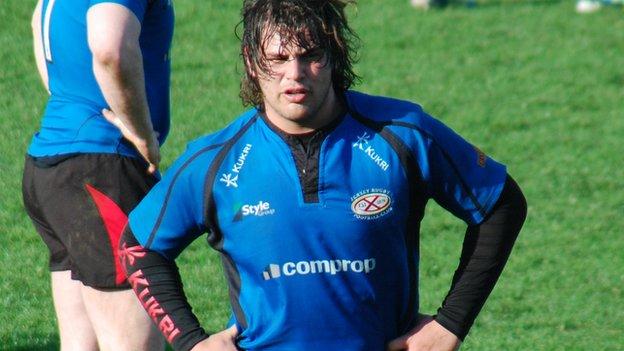 Pontypridd ran in seven tries on their way to a comprehensive 48-17 win over Jersey in the British and Irish Cup.

Joel Dudley and Talite Vaoileti grabbed early thouchdowns for the islanders, but Ponty were 22-10 ahead by half-time after scores from Matthew Nuthall, Jack Dando and Aled Summerhill.

And the hosts made it safe as Owen Sheppeard, Gareth Wyatt, Summerhill again and Bradley Thyer all went over.

Both teams went into the game knowing they could not qualify for the quarter-finals.

But Jersey piled on the pressure early on and Dudley's try came just four minutes into his first competitive start for the club after recovering from long-term injury.

The lead did not last long though as winger Nuthall crossed the line to put the Welsh Principality Premiership leaders ahead.

Tongan forward Vaioleti went over after quarter of an hour to put the Channel Islanders back in front, only for Dai Flanagan's penalty and tries from hooker Dando and debutant Summerhill to give Ponty the half-time advantage.

It was a lead they never relinquished and Sheppeard's try under the posts early in the second period secured a bonus-point.

Full-back Summerhill raced in for his second before replacement Wyatt went over and prop Bradley Thyer scored in the corner to stretch the lead to 48-10.

Winger Copsey touched down with the final move of the match, but it was far too little, too late for the visitors, who finished bottom of the group with one win from their six games.

"Coming to Wales is always very difficult," said Jersey boss Ben Harvey, who left out many first team regulars ahead of next weekend's crucial Championship clash with fellow strugglers Doncaster.

"I thought our boys stuck at things very well throughout and there were lots of really good patches.

"It was a good test and all credit to Pontypridd, they proved why they are top of their league."