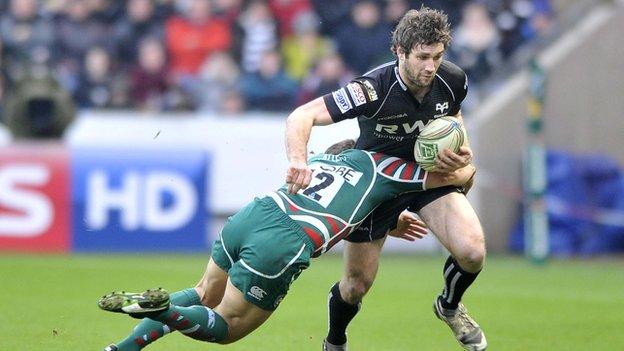 Centre Andrew Bishop has signed a new three-year deal to stay at Ospreys until 2016.

The 27-year-old Wales international is the 10th player to commit to the Welsh region in recent weeks.

Bishop is currently sidelined with a back injury but hopes to return before the end of the season.

Of his new deal, he said: "It's great news, I want to stay with the Ospreys, which is a great place to be and is where I've played all my senior rugby."

Bishop added: "There's a very good squad here with competition for places right through it. There are a huge amount of youngsters in the squad, so I'm in a strange position where at 27 I'm one of the oldest backs here.

"It's an honour to be able to take a senior role in the group and to help the young players coming through. It's something I really enjoy doing and I take great pleasure from seeing how well these guys do as they come through into the team.

"When you look at the players who've come through over the last couple of years, and the boys coming through now, I'm really excited about the future of the Ospreys and I'm delighted that I'm going to be a part of it."

Bishop made his debut for Ospreys against Borders as a 19-year-old back in February 2005 and has been a constant fixture ever since.

He has been part of their four league title wins and scored in the Anglo-Welsh Cup victory over Leicester Tigers in 2008.

Bishop tops the all-time appearance list for Ospreys with 188, sitting two ahead of Jonathan Thomas, with Duncan Jones a further two appearances behind.

The 16-times capped Wales international made his debut in 2008 on the tour to South Africa and last played for Wales against the Barbarians in June 2012.

Bishop is recovering from surgery to resolve a disc issue in his back, but remains positive about his chances of returning to action before the end of the current campaign.

"I haven't given up hope of playing again this season," he said.

"If we make the top four that gives me more time and I'd love to be involved, lending my experience to the cause.

"I've been pretty lucky throughout my career. This is the first proper injury I've had so I'm just looking forward to getting over it now and getting back playing."