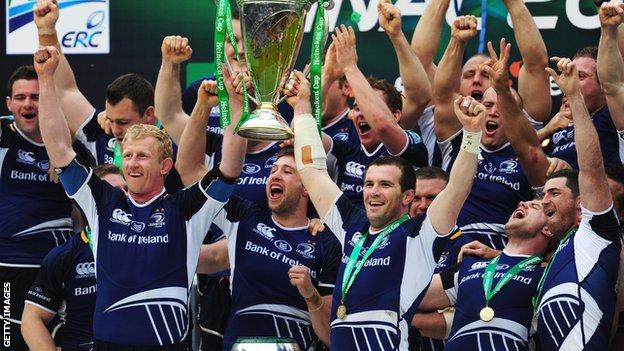 The top three sides in the English Premiership, the leading duo in the French Top 14, Ireland's current top dogs and a two-time champion team.

This weekend's Heineken Cup quarter-finals are not short of quality or pedigree, with four thrilling contests in prospect.

Only 16 of the previous 64 quarter-finals in the tournament have been won by the away side, although Munster account for three of those victories, and Ulster won at their Irish rivals' Thomond Park fortress at the same stage last year.

Heineken Cup pedigree: Clermont narrowly missed out on the final last season, losing an epic semi-final to eventual champions Leinster, who also beat them at the quarter-final stage in 2010. Montpellier have qualified in only their second Heineken Cup campaign, having won only one match in their first effort last season.

Form guide: Clermont have won 58 consecutive home games. They beat reigning champions Leinster home and away in their pool, have won five of their last six Top 14 matches, and are two points behind Toulon at the top. Montpellier, who beat Toulon at home in the pool stages, are in sixth, in a play-off spot, after winning three of their last five league games.

Players to watch: In Clermont's team of stars perhaps the most gifted of all is in-form centre Wesley Fofana. One of only a couple of France players to emerge with credit from the Six Nations, the gliding speedster has the priceless gift of being able to beat players effortlessly.

Montpellier's talisman is world class Georgia back rower Mamuka 'Gorgodzilla' Gorgodze. A one-man wrecking machine in both attack and defence he is possibly the nearest thing to a force of nature in the European game at the moment.

Verdict: Clermont to win by 10 points

Heineken Cup pedigree: Saracens were out-classed at home by Clermont at the same stage last season, but are trying to at least match their best effort of 2008, when they lost to Munster in the semis. Ulster reached the final last year and were Ireland's first winners of the tournament back in 1999 - when the trophy was lifted by current Ulster boss David Humphreys and his opposite number at Twickenham, Mark McCall.

Form guide: Sarries, who won a tough pool ahead of Munster, have won their last four Premiership matches in some style. Ulster have endured a wobble with three defeats in four matches in the Pro12 after winning their first 12 league matches, but came back to form with victory at Leinster on Saturday.

Players to watch: Mako Vunipola broke into the England team during the Six Nations and the 20-stone loose-head's ball-carrying and ball-handling skills make him the ideal prop for the modern game - if he gets on the front foot he takes some stopping.

Ulster have the worst line-out success in the tournament this year at only 74% while Saracens have the best at 94%, so influential South African captain and second row Johann Muller will need a big game if the Irish province are to progress.

There will be full commentary on BBC Radio 5 live.

Heineken Cup pedigree: Quins have reached the last eight on three occasions but never gone further. The last time, in 2009, they lost at home to another Irish side, Leinster, in a match that became known for the infamous "Bloodgate" scandal. Munster have now reached the knock-out stages in 14 of the last 15 seasons, winning the trophy in 2006 and 2008 and reaching two other finals.

Form guide: Quins, who won all six matches in their pool, have slipped from first to third in the Premiership this month after defeats in their last three matches, but remain in the play-off places. Munster have only won two of their last five and are 11 points off the Pro12 play-off spots after a mediocre campaign.

Players to watch: A former Lions captain, and a contender for this year's captaincy. Chris Robshaw's hopes of skippering the 2013 Lions may have suffered a dent after Wales battered his England side in the final round of the Six Nations but the Harlequins open-side had an outstanding tournament personally and his relentless work ethic lies at the heart of the English champions' recent success.

Paul O'Connell, who led the Lions in 2009, is the ultimate grizzled veteran and now fit again after long-term back problems, the 33-year-old second row will be hoping to drive two-time champions Munster deep into the knock-out stages once again.

There will be full commentary on BBC Radio 5 live.

Heineken Cup pedigree: Toulon lost to south coast rivals Perpignan in Barcelona's Olympic Stadium on the only other occasion they reached this stage, in 2011. Leicester are one of only two teams to have won back-to-back Heineken Cups, in 2001 and 2002.

Form guide: Toulon remain the Top 14 leaders after three victories in their last four matches, including thumping wins over Toulouse, Biarritz and Stade Francais. Leicester are firmly in contention for a home Premiership semi-final, having trounced Northampton in some style on Saturday.

Players to watch: Master v apprentice. Friend v friend. Toulon's Jonny Wilkinson lines up for the first time against the man who succeeded him at both club (Newcastle) and international level, Toby Flood.

They were born in the same Surrey town of Frimley (although Flood actually grew up in the north of England) and played alongside each other at Newcastle, but are different types of players - Wilkinson the master kicker and organiser, Flood more inclined to get flat and attack the line.

Match-ups abound across the pitch and the Mathieu Bastareaud v Manu Tuilagi rematch at centre (Tuilagi won on points in the Six Nations) should be seismic.

There will be full commentary on BBC Radio 5 live sports extra.