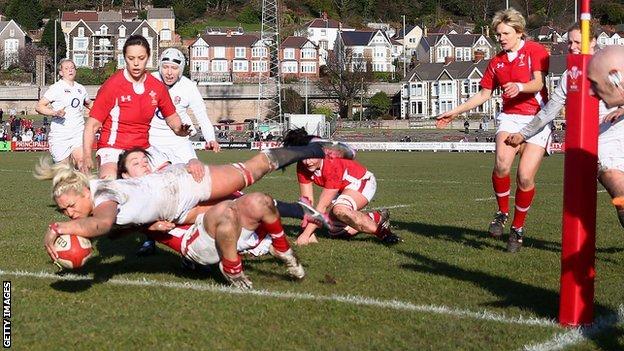 Rugby bosses have been warned that splitting the women's Six Nations would be "the end" of women's 15-a-side game.

A two-tier championship has been proposed, with England, France and Ireland in the top division and Italy, Scotland and Wales in the second.

Former Wales captain Non Evans told BBC Sport: "If this happens it's the end of women's 15-a-side rugby as we know it."

Some nations have refocused funding to rugby sevens in preparation for its inclusion in the 2016 Olympic Games.

United States have employed their sevens players on a full-time basis while the Netherlands - considered one of the best sevens teams in the world - have not qualified for a 15-a-side World Cup since 2002.

Evans, who won 87 caps for Wales, added: "If I was 10 years younger I would be gearing all my training into playing sevens and making it into Team GB for 2016 - that for me would be the pinnacle of the sport.

"Countries like Canada are putting most of their women's focus into sevens because they know the Olympics is coming.

"The platform is huge for the women's game - bigger than anything we have now.

"But if we don't have big marquee tournaments like the Six Nations, 15s will be marginalised for women - that would be very sad."

The proposed changes to the Six Nations are understood to be driven by the financial implications associated with women's internationals.

A vote could be taken as early as 10 April when the Six Nations committee next convenes.