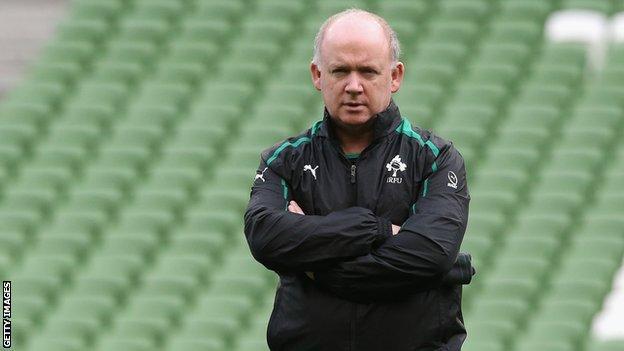 Wood believes Kidney had to go after a poor Six Nations campaign which ended with a 22-15 defeat by Italy.

But the former hooker told BBC Radio 5 live that Kidney's end saddened him.

The BBC Sport pundit explained: "We won a Grand Slam for the first time in 60 years in 2009 and yet he may be remembered for a lacklustre performance at this year's Six Nations."

The Italy defeat marked Ireland's worst run in the Championship since it increased from five to six teams in 2000.

It's sad in many ways. The man delivered incredibly well for Ireland

That led to the head coach questioning his own future but his five-year tenure ended on Tuesday when the Irish Rugby Football Union announced it would not offer him a new deal when his contract expired at the end of June - and that he was leaving his post immediately.

Wood said: "I think it was inevitable. If you look back at the summer, and the 60-0 drubbing by the All Blacks and the decisions he made in and around that time, some of them were a bit questionable. I think he put himself under a lot of pressure."

But Wood, who won 58 caps for Ireland, had sympathy for Kidney: "He has been hindered by an unbelievable and unprecedented injury list.

"It's sad in many ways. The man delivered incredibly well for Ireland."

The search is now on for a successor to Kidney, 53.

Wood said: "It's still is one of the plum jobs in international rugby. It is unfortunately however in the midst of a run-in to a World Cup so that does take some of the big names out of the system.

"There's talk of Leinster head coach Joe Schmidt. He's already employed by the Union but might be convinced to step up and do the job up to the World Cup. By which time we would hope to have some succession planning going. There's been very, very little in Irish rugby.

"There had been talk of Conor O'Shea but he's declared he doesn't have an interest and he wants to see out his time at Quins. It's a little bit up in the air so the IRFU is taking bit of a time to make the decision."