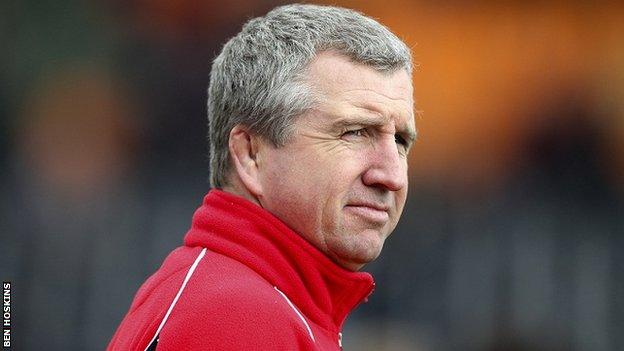 Head coach Lyn Jones believes London Welsh can have their Premiership destiny in their own hands when they play their final game of the season.

With three games remaining, the Exiles are bottom of the table - eight points adrift of 11th-placed Sale.

Jones told BBC Oxford: "The challenge for my side is to win three games of rugby and I believe we can do that.

"Our final game, against Worcester at home on 4 May, will be a big day of rugby in Oxford."

Following their 25-40 defeat at home to Bath on Saturday, London Welsh must face Northampton at home and London Irish away before their season climaxes against the Warriors at the Kassam Stadium.

Sale, who earned three points by coming back to draw 33-33 with London Irish on Sunday, must play Gloucester at home, Northampton away and Wasps at home.

Jones believes two wins could be enough for his club, which has yet to decide whether to appeal to the Court of Arbitration for Sport against an RFU disciplinary panel's decision to deduct them five points for fielding an ineligible player.

"If we want to be in the Premiership we need to win at least six games of rugby this year, and we've won four," he said.

"There was lots of really good play against Bath. We look well structured in attack and defence, we're starting to understand the standard.

"We dealt with their strong scrum and strong maul, but unfortunately Bath had four million-pound players they can afford to buy, and they played really well and were influential in lots of aspects of the game.

"I have players giving everything they have for London Welsh. If you're getting every ounce of effort out of your players then you're doing your job, and that's what we're doing here.

"We like to think we have brought something to the Premiership this year."