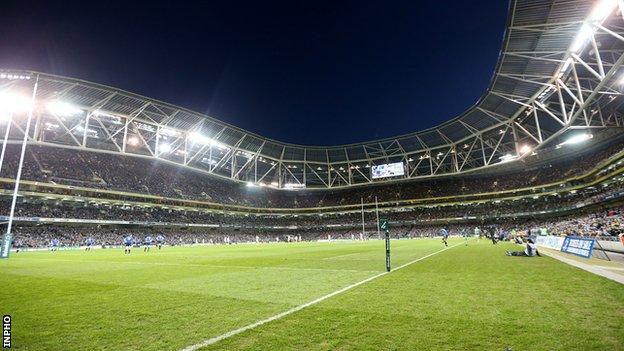 The Aviva Stadium will host a Heineken Cup semi-final if Ulster beat Saracens on Saturday.

The game, scheduled for 28 April, will be staged at the Dublin venue or Twickenham, selected as the home ground for Saracens if they win the clash.

Toulon or Leicester Tigers will face the winners from Saturday's quarter-final at Twickenham.

Munster's reward if they beat Harlequins on Sunday is a semi-final at the Stade de la Mosson in Montpellier.

Clermont Auvergne and Montpellier face each other, with the winner playing host to the victor from the Twickenham Stoop game.

The 32,000-capacity ground is the home of the city's Ligue 1 football club and this will mark the first time it has staged a Heineken Cup knockout match, although it was the venue for Montpellier's meeting with Leinster in the group stages last season.

Ulster defeated Edinburgh at the Aviva Stadium in last year's Heineken Cup semi-finals, and the venue will host the 2013 final on 18 May.