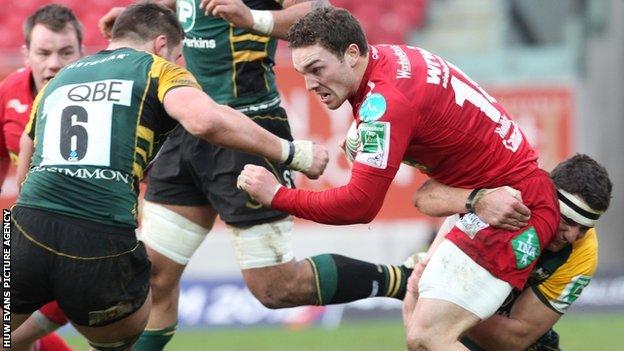 Saints chairman Keith Barwell told the Northampton Chronicle and Echo: "It's a big decision for George and we don't want to put undue pressure on him.

"He's got to make sure that when he makes the decision it's the right one for him."

The Aviva Premiership club boss says they will give North "time and space" to ponder his decision.

North's agent, Christian Abt of ABC Sport Management, with Northampton over the player's future.

And Scarlets legend Phil Bennett has said the Scarlets

Welsh speaker North, who was born in the English town of King's Lynn, made his Test debut as an 18-year-old against South Africa in 2010.

He scored two tries on that occasion and went on to play a starring role as Wales reached the 2011 World Cup semi-finals, before helping them secure the 2012 and 2013 Six Nations titles.

If he decided to leave, North would join France-bound centre Jamie Roberts and Dan Lydiate in exiting the Welsh regions.

And North's fellow Wales wing at this stage of his career.

Since making his debut for the region in September 2010, North has made 40 appearances for the Scarlets - nine more than he has made for Wales.