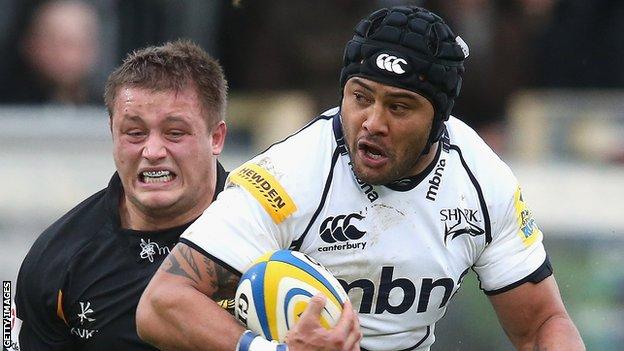 The 31-year-old, capped nine times by New Zealand, was after joining Sale from Munster in 2011.

but Tuitupou has remained a key figure in the side, starting all 18 Premiership matches in 2012-13.

"I am very happy at Sale and my family is happy in the area too. You've got to be happy off the field for things to go right on it," he told the club website.

"There was a decision to be made as to whether to move or remain and set the family up here, so it was a joint decision between myself, my wife and the kids. I'm more than happy to stay."

If we can get a win at London Irish, hopefully it could go a long way to helping us stay up and then we can really concentrate on kicking on next year

A number of first-team regulars, including back-row forward Seymour and full-back Rob Miller, have agreed to stay at the Salford City Stadium beyond the end of the campaign, while

Director of rugby Steve Diamond added: "Sam's a top class player. He was captain last year and he helps our current skipper Dave Seymour in so many areas.

"We were very keen to keep Sam looking to the future. He gives us the go forward that we want in attack and he is a great influence in the changing rooms."

The Sharks, who last season, are five points clear of bottom club London Welsh with four matches remaining, starting with a trip to London Irish on Sunday.

Tuitupou continued: "It has been a pretty rough time for the club but since I've made the decision to stay earlier this year things seem to be going right.

"We've got four crucial games left this season and, if we can get a win at London Irish, hopefully it could go a long way to helping us stay up and then we can really concentrate on kicking on next year."