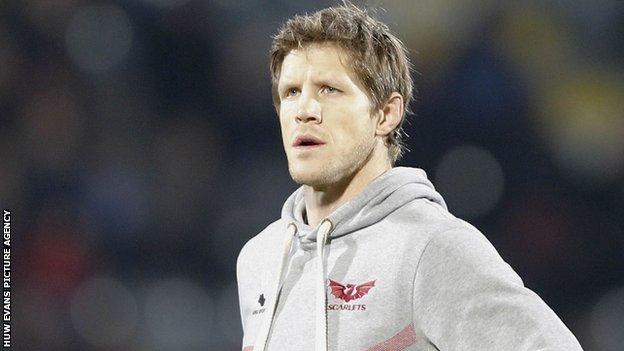 Scarlets head coach Simon Easterby has called on the four Welsh regions to do more to help themselves financially.

The former Ireland and British and Irish Lions flanker is grateful for the contributions of benefactors.

But Easterby believes the ultimate goal should be for the regions to be able to stand on their own financially.

"Ideally you'd want the clubs, the regions, to be self-funding and we can only do that if we're performing as well," Easterby told BBC Sport Wales.

"We as regions have to do our best with what we have. Certainly down at the Scarlets we have a number of very generous benefactors, guys that come along every year and are prepared to finance some of the club.

"But there's got to be a balancing act and we've got to produce more performances on the pitch to get more people through the gates."

Coming off the back of the Wales Six Nations victory... it's so important that regional rugby is seen in a positive light

Part of this cost-cutting was sparked by dwindling crowds, with average gates of fewer than 7,500 spectators at the end of 2011 when the cap was introduced.

The best crowd this season has been for the Boxing Day derby between Ospreys and Scarlets, where 19,443 came through the turnstiles at the Liberty Stadium.

But that turnout is far from the norm and has seen the regions and Welsh Rugby Union launch a derby double-header for this weekend billed as 'Judgement Day', which will see Dragons face Scarlets before Blues take on Ospreys - with the back-to-back games taking place at the Millennium Stadium.

"Hopefully occasions like this will generate more interest in the Welsh regional game. More often than not there's 75,000 people come and watch the national side play, win or lose, and we need to make sure we buy into some of that," said Easterby.

"Coming off the back of the Wales Six Nations victory, it's so important that regional rugby is seen in a positive light.

"The regions - other than the Ospreys winning the Pro12 last year - have suffered a little bit, both spectator-wise and probably some results as well.

"So it's really important we show exactly what we're made of [in Saturday's Judgement Day promotion]... there's competition for Lions places up for grabs, there's plenty to play for in terms of Pro12 top four positions.

"So there's little battles going on across the board and we're desperate to keep our momentum and keep in that hunt for the top four."