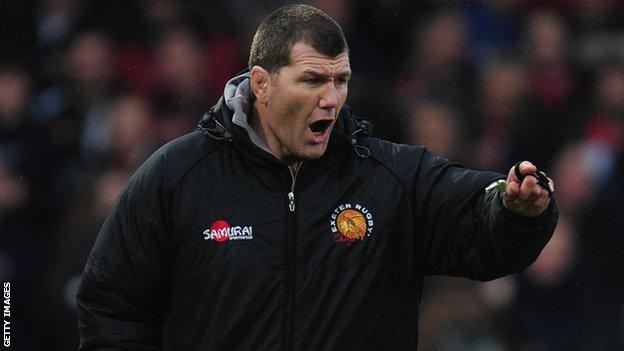 Exeter head coach Rob Baxter says his decision to help coach England on their summer tour to Argentina will not adversely affect the Chiefs.

Baxter will while Graham Rowntree coaches the British and Irish Lions on their summer tour to Australia.

"I don't think it'll have too much effect on what happens here at Exeter," he told BBC South West Sport.

"If it was going to have a negative effect I wouldn't be going."

It is a first taste of international coaching for the 42-year-old, who was named last season's

"I think this is just another little indicator that we're starting to do things right here," Baxter said.

"Hopefully it's one of those accolades that the club gets and it's not just an individual thing.

"I had a thought long and hard about it because what we do here at Exeter has to be the most important thing.

"But I think the England role is an opportunity for me to get better and experience different things.

"I'd be a bit of a hypocrite if I said to the players that I expect them to want them to be ambitious and play international rugby and turn around and I say I'm not going to do that."