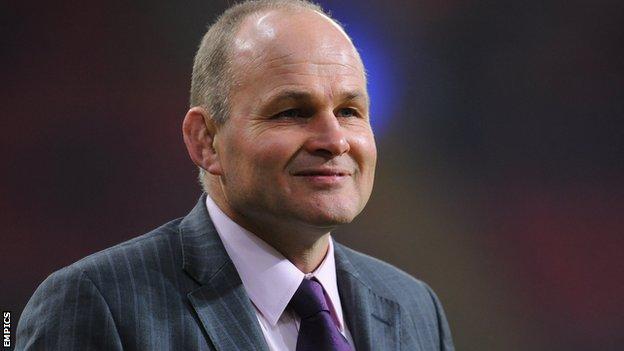 Former England and Scotland coach Robinson was initially drafted in to work alongside head coach Liam Middleton in February.

But Middleton was sacked from his role a month later, with Robinson taking sole charge of the first team.

"It's been a refreshing change," Douglas told BBC Radio Bristol.

"Liam had worked hard and done a good job but sometimes a change is as good as a rest. The boys are switched back on and we have some new ideas.

"It's made everyone up their game and put in a bit more effort."

Bristol have made no secret of their desire to regain their place in the Premiership, after four consecutive seasons in the second tier.

Having losing out in the final stages of the play-offs twice in the last three years, the club drafted in ex-Lions boss Robinson to aid their cause.

Middleton remained in charge of coaching for three more games before being dismissed after back-to-back defeats, and Robinson subsequently took full charge.

"We couldn't continue as we were so they made a change and it makes everyone sit up and take notice," continued Douglas.

"Having a coach who has been there and done it before - in terms of winning World Cups and coaching the Lions - you learn from that depth of knowledge."

Robinson took charge of his first game on Saturday - the 29-23 victory over Jersey - and now has three matches remaining to secure the club a play-off place.

"It was the perfect situation for him, as we won," added Douglas. "We've still got things to work on but now we can keep progressing."