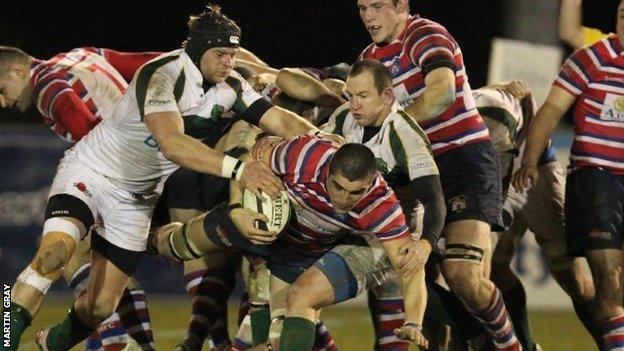 Guernsey boss Jordan Reynolds could be without up to 11 players for Saturday's re-arranged game with Old Elthamians.

The match has been moved to Saturday after bad weather forced the game to be postponed last week.

"There's no spare time to play them any other weekend, so we're going to have to do the hard yards and play over Easter," Reynolds told BBC Guernsey.

"I've got 11 guys who are unavailable, so if you take that out of our first team that's a big chunk of players."

And Reynolds says he still has not drawn up a starting team for the game against a side who are 10 points and two-places above eighth-placed Guernsey.

OE's are probably in just as bad a situation as us

"At the moment I've got about 13 or 14 and I'm just working through some names to see if we can put out a team.

"It's vital that we still put out a side and we don't lose more points than we have to for being punished for not fielding a team.

"But it's something we're both going to have to deal with at the time, OE's are probably in just as bad a situation as us, but this is the way it goes."

One player who will not play is captain Blair Campbell.

He as he but despite an extra week's rest, will still not feature.

"It's a big loss for us and he's a great player," Reynolds said.

"Scott Davidson's not there this week so we don't have our fly half and Blair wants to play this week, but I've decided it's not worth it.

"I've decided it's not worth it if he had any more injuries to himself - we don't want to be looking at playing the last three games of the season without a fly half, we've got to look at the player's health as well and well being."