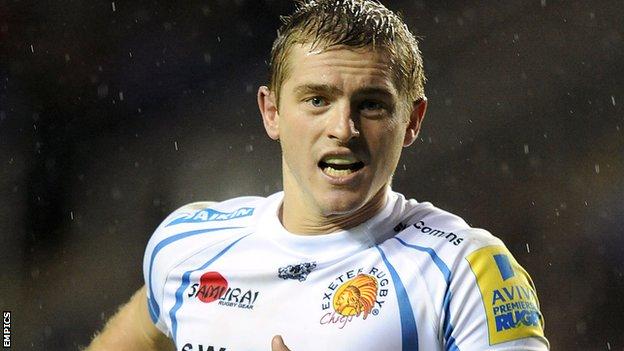 Worcester suffered their seventh defeat in eight Premiership matches as Exeter won at Sixways to keep their play-off hopes alive.

Luke Arscott scored Chiefs' first try and Gareth Steenson added a second to give them a 14-6 lead at half-time.

Matt Kvesic crossed for Warriors early in the second half and Josh Drauniniu added a second to put them in front.

But after Josh Matavesi was sin binned with 12 minutes remaining Dean Mumm went over to secure Chiefs' victory.

Andy Goode kicked Warriors ahead early on before Arscott forced his way over the try line for Exeter and Steenson added the extras.

Warriors thought they had retaken the lead but David Lemi was adjudged to have knocked on before going over.

Goode then closed the gap to one point with another successful penalty before Steenson scored Exeter's second try at the other end before converting.

Steenson kicked his first three-pointer of the afternoon before Warriors scored their first try with Kvesic touching down following a driving maul.

Another rolling maul allowed Worcester to get close to the line and allow Drauniniu to break through to go over, before Goode added the extras to put Warriors ahead.

Matavesi was sin-binned with 12 minutes to go and Exeter took advantage as Mumm forced his way over and Steenson converted to leave Worcester having to settle for a losing bonus point.

"With 15 men I think we might just have held on.

"I am really delighted with the way we fought back and our driving maul paved the way for two tries.

"I must give credit to our forwards coach, Nigel Redman, who kicked a few backsides after last week's poor performance [at London Irish]."

On Lemi's disallowed try: "It looked a good try to me and everybody else in the ground. It knocked the stuffing out of us."

"Any away wins in the Premiership are big wins. Worcester don't lose many at home but we controlled the first half as we played with a very high tempo.

"However, I was disappointed with the first 20 minutes after the interval as we became very edgy and tried to eek out a win when we should have continued to play as we did in the first half.

"We are one of the form teams in the Premiership with and three games to go we still have every chance of a return to the Heineken Cup."