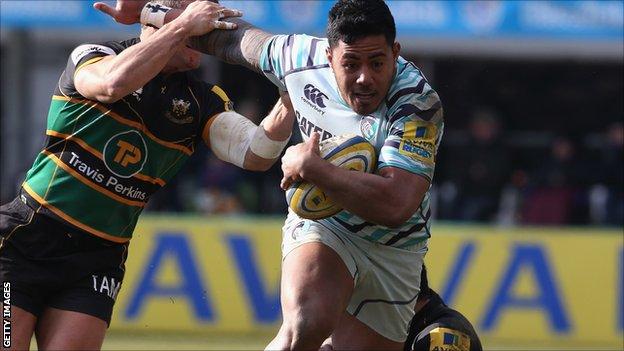 Leicester kept up the pressure on leaders Saracens with a comprehensive bonus-point victory over Northampton.

The Tigers led 12-3 at the break through four Toby Flood penalties, with Stephen Myler responding for Saints.

But two second-half tries from Manu Tuilagi and one each for Niall Morris and Matthew Tait helped Leicester close the gap on Saracens to four points.

Flood added two conversions while Myler crossed for Northampton's only try of the game, as they remain in fourth.

Leicester had their noses in front at the interval and deserved to be further ahead but had to rely on four Flood penalties to give them a nine-point lead.

Saints forward Courtney Lawes was sin-binned for a deliberate knock-on which prevented a near certain try, while Leicester were guilty of not being clinical enough.

Northampton showed very little going forward with Myler's penalty their only offering, while the Tigers suffered an injury blow just before the break with England prop Tom Youngs forced to withdraw.

Leicester came out flying after half-time and Tuilagi bundled over in the corner for the first try of the game.

Northampton came back firing and their pressure eventually told with Morris sin-binned for a deliberate knock-on, and from the resulting penalty Saints made their extra man pay with Myler diving over after a clever pass inside.

But in Tuilagi Leicester had the outstanding player on the field and after scrum-half Ben Youngs recycled the ball, the England centre charged through Northampton's weak midfield defence to cross for his second try.

Morris returned to the game after his yellow card and almost immediately crossed in the corner after another Leicester break.

Tait got their fourth, finishing off Tom Croft's superb break to seal the bonus point with Flood adding the extras.

"We were well beaten and defensively it was very poor.

"We were a little bit soft in defence, we held off them and it was a long second half.

"We didn't defend as a team and our defensive system broke down, we conceded a lot of territory out wide. It is a big blow for us; we had a chance to put ourselves right up there. It is a major blow to lose like that at home.

"But we are still in fourth position with three games to go. If we get into the semi-finals and if we play away from home it is probably where our best rugby has been played this season."

"It was a massive game for both sides, we wanted to meet fire with fire at the scrum and lineout, keep them on the back foot, and be as positive as we could be. If you can stop Saints at set-piece they struggle to get rhythm into their game and that was the case.

"We spent all Tuesday morning brawling against each other doing lineout drive defence and I think the turning point was when they didn't score from those lineout drives in the second half, psychologically they were done for then. If you stop that it takes a big part of Saints' game away.

"The second spot is ours for the taking now and maybe even top spot depending on what Sarries do."