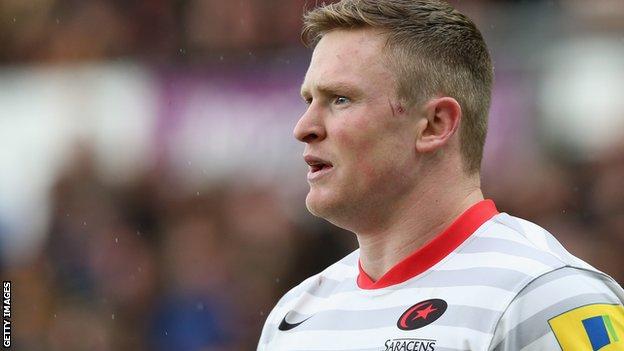 But Chris Wyles touched down in the corner for Sarries as they ended the opening period 13-8 behind.

And Ashton's try, plus penalties from England colleague Owen Farrell, continued the comeback after the break to ensure the win was Saracens'.

Despite the visitors' impressive record in the Premiership this season, it was actually mid-table Wasps who started the brighter and quickly took control.

Daly's long-range kick set the hosts on their way, before Wade scored the opening try of the match to extend the advantage.

The 21-year-old intercepted Charlie Hodgson's sloppy pass and ran in from 60 yards to go over for his 10th Premiership try of the season. Stephen Jones converted and another Daly penalty, this time from an angle, put Wasps 13-0 ahead.

But their good early work soon began to unravel, thanks firstly to Alex Goode's quick thinking.

The England full-back decided to take a quick tap as Wasps expected the visitors to kick for goal, and he broke to send Wyles over in the corner. Although Farrell missed the conversion, he did successfully kick a penalty to reduce the deficit to five points going in at the interval.

Saracens, who had Mouritz Botha sin-binned a minute before half-time, continued their charge after the break.

Farrell kicked another three-pointer, and then Ashton went through for what proved to be the all-important match-turning try.

The England man latched on to Goode's kick through and, despite the attentions of Daly, went over in the corner to put the visitors in front for the first time.

Farrell again missed the conversation, but added another two penalties - the second after Billy Vunipola was sin-binned for deliberately knocking on beneath his own posts - to ensure Saracens would maintain their position at the top of the Premiership.

"It was a game we didn't have control of. We started well but it's very difficult to play without the ball. For big periods of the game our handling and ball retention was really poor.

"We had something like 16 handling errors which meant we never really worked Saracens hard enough in defence to stress them.

"If you give the top teams that amount of ball in that territory they are always going to come away with points."

Saracens director of rugby Mark McCall on the impact of Chris Ashton:

"I thought he was absolutely brilliant today. It was the Chris Ashton everybody talked about two years ago, popping up all over the place, hands on the ball, making breaks.

"But he also defended very well, he was hungry for work, he was energetic so it was great for him.

"He's a sensitive soul and anyone in the world who is sensitive is going to be affected a little bit by some of the criticism he received.

"However, when he came back to Saracens he knew he was coming back to a place where we won't judge him in that way."