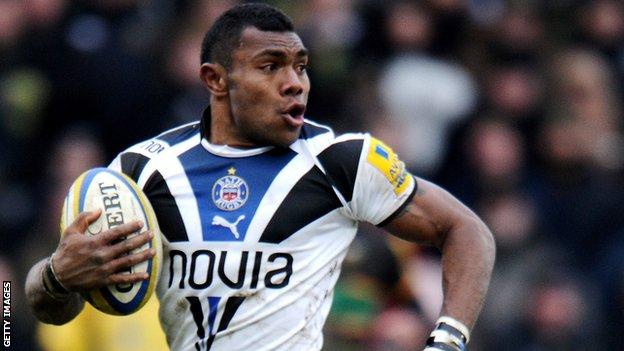 Bath piled more misery on struggling London Welsh with a comfortable win in the Aviva Premiership.

Tries from Matthew Banahan, Carl Fearns and Semesa Rokoduguni put the hosts in the ascendency, while Alex Davies kicked three penalties to set up a half-time score of 20-9.

After the break, Davies kicked further penalties and Seb Jewell touched down to keep the visitors in contention.

The Exiles, whose appeal against the five-point deduction handed to them for fielding an ineligible player was turned down this week, would have been looking for a fast start but they quickly found themselves trailing.

Banahan stormed through the London Welsh defence to touch down in the corner to put Bath ahead after barely 100 seconds, although Stephen Donald missed the conversion from out wide.

The home side, who struggled to get their lineout functioning properly in the 14-13 defeat by Sale last week, soon had it working to good affect - with 10 minutes on the clock Dominic Day collected, Fearns took control and crashed his way over for the try.

Donald this time saw his conversion rattle off the post but did go on to add a more routine kick to extend Bath's lead to 13 points.

The talismanic Banahan was then forced off with a knee injury and with his departure the early momentum was lost.

Three successive penalties from Alex Davies hauled the visitors back into contention after sloppy play by the hosts, although it may have been even better for the Exiles had Rokoduguni's brilliant last-ditch tackle not prevented a first London Welsh try of the match.

And with just seconds of the opening period remaining, it was 25-year-old Fijian who was able to provide a moment of magic at the opposite end of the field to give Bath breathing space once more.

Donald's clever pass found it's way to Rokoduguni and he strolled through from the 10-metre line. This time Donald successfully added the additional points to give Bath a 20-9 half-time lead.

But where the home side began the first period so strongly, this time it was the Exiles who got off to a bright start and again the boot of Davies was instrumental.

The 26-year-old, starting only his second Premiership match of the season, kicked another three penalties in quick succession to close the gap to just two points.

But Donald added another three points for Bath before Rokoduguni teed up Agulla to reassert the home side's superiority. Replacement Tom Heathcote kicked the conversion and the game looked to be won.

However, Jewell's try for the Exiles - again converted by the impressive Davies, who kicked a total of 20 points in the match - pegged the home side back once more and ensured they would have to work for their victory.

But Heathcote's penalty and Claassens' last-minute score, converted by Heathcote, finally settled the match and added gloss to the scoreline for Bath.

"It was a bit more stressful than it needed to be - with five tries to one on the scoreboard.

"We started really well, very positive and got 13 points up. Then, for whatever reason, we let them back into the game and they picked us off with three points here and there.

"I thought when Rokoduguni scored just before half-time that was a fairer reflection of the game but they started the second half well.

"We knew there would be a big opening 20 minutes from Bath and they didn't disappoint us.

"They were good, really good. But I'm pleased with the effort the boys put into defence and attack.

"Overall, it's a fair result but all I can ask our players is to give everything, every week and that's what they're doing."

On the possibility of a further appeal, to the Court for Arbitration in Sport, against their recent five-point deduction: "I hope we do. But that is out of my hands."