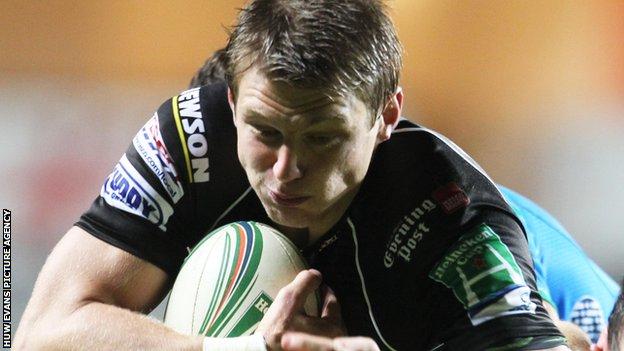 Wales fly-half Dan Biggar has signed a new three-year contract to stay with the Ospreys.

The 23-year-old, whose current deal expires at the end of this campaign, will now stay at the Liberty Stadium until the end of the 2015-16 season.

Biggar told BBC Wales Sport in January that he expected to sign a new deal with the Welsh region.

"This is an organisation that has always been very good to me and supported me," said Biggar.

"So it's great that I can recognise that by committing my future to the region.

"It's always nice to get things sorted and to be all done and dusted, and now I've signed it means I can concentrate on the next few weeks and helping the team to secure a play-off place without any distractions."

Biggar, who has won 16 Wales caps, was a key figure in the Six Nations title-winning side, starting all five matches in the 2013 campaign.

He is the latest Wales international to commit his future to Welsh rugby and buck the trend of players moving to France and England.

He follows Wales wing Alex Cuthbert, who recently signed a three-year-deal to stay with Cardiff Blues after also being linked with a move to France.

But Jamie Roberts, the Wales and British & Irish Lions centre, has revealed he will leave the Blues and Wales flanker Dan Lydiate has decided not to renew his contract at Newport Gwent Dragons.

Both are expected to sign for a French club, while George North has been linked with a move to Northampton Saints in England.

"Some negotiations can be straightforward, others take a little bit more time, but what's important is that you get it right in the end," said Biggar.

"I think that both parties are very happy with where we are and can really look forward to the future positively.

"The Ospreys wanted to keep me and I wanted to stay so it's always been a case of agreeing on a few things. It's not just financial, there are other things that come into the equation."

Biggar made his senior Ospreys debut as an 18-year-old, as a late replacement in an EDF Energy Cup semi-final win over Saracens at the Millennium Stadium in 2008.

In November 2011, when he had just turned 22, he overtook James Hook to become the region's all-time highest points scorer, a record he has since extended to 1,206.

Biggar became the youngest ever Osprey to reach 100 regional caps in April 2012 and now stands on 121 appearances. He won his first senior Welsh cap in November 2008 against Canada.

"My aim is to be competing for trophies with the Ospreys every year," said Biggar.

"I've discussed this at length with the coaches and management here. I've made that ambition absolutely clear, and I wouldn't have committed for the next three years if they didn't share those aims."