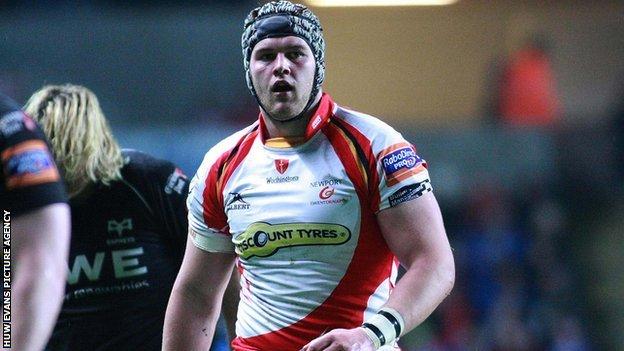 Lydiate made his comeback against the Ospreys on Friday after breaking his ankle in September.

The 25-year-old Wales international played the first half of the 52-19 defeat before being replaced.

"A month is enough time for a player of Dan's quality to prove himself worthy of a Lions spot," said Edwards.

"He has worked very hard and all he needs is to blow away the cobwebs."

Lydiate has only four games of the club season to show he is ready to be selected in Warren Gatland's touring party, but Edwards is confident the tough-tackling back-rower has enough time to prove his fitness.

The 2012 Six Nations Player of the Tournament has been sidelined for six months after he dislocated his ankle against Edinburgh in the autumn.

The Dragons coach is confident Lydiate will book his place on the Lions tour and will allow the Wales flanker to play "until he drops" to help him make the trip down under.

"I am sure Warren Gatland knows what balance of team he wants and knows that Dan, with his hard hitting and physicality, would have stood out for Wales against England."

Edwards will now look to increase Lydiate's game time before the end of the season, when he will leave Rodney Parade. He has been linked with a move to Racing Metro in France.

The Dragons face the Scarlets at the Millennium Stadium on Saturday, and Edwards will let Lydiate play for as long as he can last.

"We could only play Dan for 40 minutes on Friday, so we were compromised in some ways, but it was important to get him out on the pitch," he said.

"I thought that he did very well and was hunting tackles like he is known for. I am sure there will be another step up in his performance now that he has got that game under his belt.

"We will now let Dan go flat out until he drops against the Scarlets."