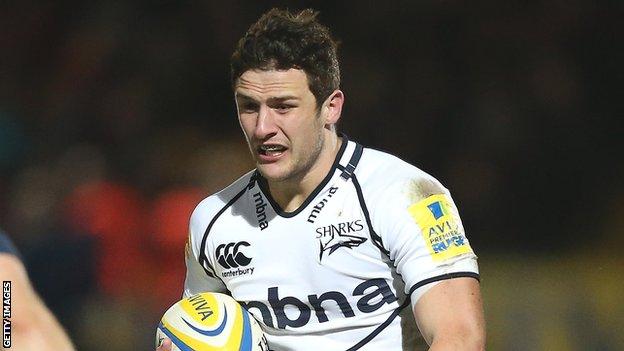 Sale's Tom Brady has said his match-winning contribution against Bath ended a frustrating recent spell for him.

The 22-year-old winger's season has been disrupted by injury.

But Brady crossed for his second try of the campaign, and his first since September, as to aid their Premiership survival hopes.

"It's a great feeling because the team's been bottom of the league and personally it's been a tough last eight weeks," he told BBC Radio Manchester.

"I had a good chat with 'Brush' [head coach Bryan Redpath] in the week and it all happens for a reason."

Brady had featured just twice in the Premiership in 2013 before Friday, and was not originally selected in the matchday squad of 23.

However, Scotland international Richie Vernon injured his foot prior to kick-off, allowing Brady to take his spot among the Sale replacements.

And he seized the opportunity, scoring a try in the closing stages to give his team a crucial win.

The victory, coupled with a narrow defeat for bottom club London Welsh at Gloucester a day later, moved with four matches to play.

Brady has said the Sharks, who have hit form since the turn of the year, are targeting more than just survival.

"If we can pull ourselves out it and finish ninth or 10th, as well as getting to the final of the LV= Cup, it won't be too bad," he added.

"We set ourselves high standards at the start of the year, to get right up there amongst it, but it wasn't meant to be. Hopefully we'll get a result again next week [at London Irish] and we'll be looking alright."