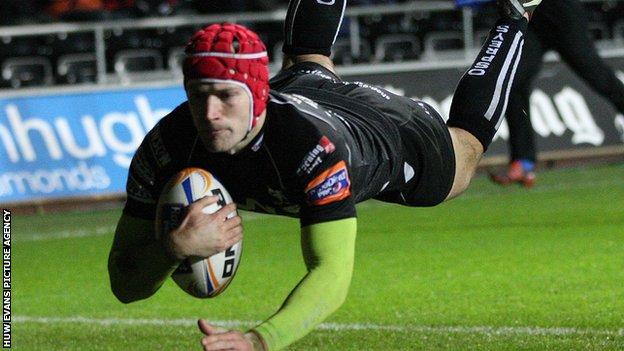 Full-back Richard Fussell has signed a new Ospreys contract keeping him at the Liberty Stadium until the end of the 2015-16 season.

Fussell becomes the eighth player to commit to the region in recent months.

"It's great to know that management see me as part of the future of the region," said Fussell.

"It's huge for me, knowing that the Ospreys want to keep me here for the long term.

"I really enjoy being part of the squad. The first goal over the three years of the new contract is to keep that jersey.

"We want to push on as a team over the rest of the season, try and get into the play-offs and retain the Pro12 trophy, while on a personal level I want to keep pushing myself and continue improving."

Fussell moved to the Ospreys from Newport Gwent Dragons in the summer of 2010 converting from the wing to full-back.

He arrived at the Liberty Stadium having scored 23 times in 78 Dragons appearances and has continued to impress as an attacking full-back.

And Ospreys rugby operations manager Andy Lloyd says he has been surprised Fussell has not been not recognised at international level.

"If I'm honest, I believe that Richard is someone who goes under the radar outside of our environment but he is a model of consistency for us and has been outstanding ever since he arrived at the Ospreys," said Lloyd.

"This season in particular he's been sensational, the way he's coped with being the old head and the only constant in an ever changing, regularly patched up back three.

"He's dealt magnificently with having to work with so many different combinations and his attitude in helping through so many youngsters has been admirable.

"It gives us a real boost knowing that someone like Richard, who is totally committed to the cause, is going to be a part of what we are looking to build here over the next three seasons."