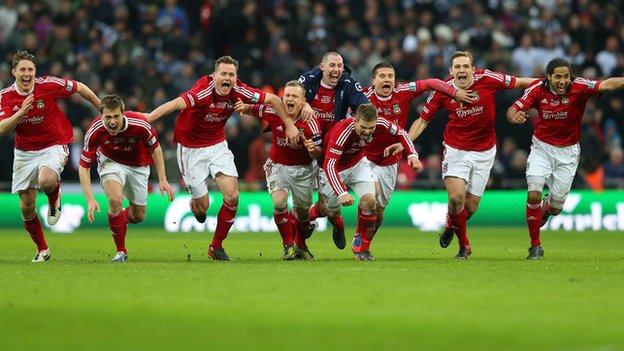 Wrexham player-manager Andy Morrell says he will saviour the dramatic penalty shoot-out win over Grimsby in the FA Trophy final for a long time.

But they gave a perfect display of spot kicks to win the shoot-out 4-1.

"It's been a great two days. I'm going to savour this for a long, long time," said Morrell.

"I didn't think we were going to do it, but we were brilliant.

"We kept going and attacking, but their 'keeper was stopping everything. But it's just brilliant."

Andy Cook had given Grimsby the lead, firing home after his first shot had been blocked by Chris Maxwell.

But Kevin Thornton levelled from the spot after Dean Keates had been fouled to set up extra-time, which produced no further goals.

"I took one [a penalty] at Brighton last season. I wanted to take a penalty and it's just lucky it fell as the winner. I'm pretty made up.

"It's the best feeling ever, can't beat it.

"I'm over the moon for the fans here you know. Everyone's enjoying the day and to get the winning penalty as well - everyone who was on here today deserves it, but it's on to the league now."

Wrexham goal scorer Kevin Thornton played down his role in converting the penalty which brought his team back onto level terms.

"Obviously it was a big penalty to get back in the game, but the main thing is the boys won it," he said.

"You'll never get days like this again in your career so you have to make the most of them. Obviously we were the better team today but it's just a horrible way to win a Cup final.

"The fans have been amazing. For them to have a day out like this is brilliant."

Wrexham, who are third in the Conference, return to league action on Saturday with a visit to Hyde.