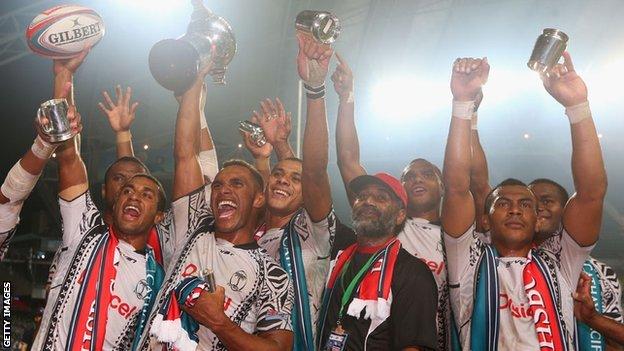 Wales lost a 19-point half-time lead as they were were beaten 26-19 by Fiji in the final of the Hong Kong sevens.

The Welsh led 19-0 at the interval thanks to tries by Cory Allen (2) and Alex Webber, Rhys Jones converting two.

But a hat-trick of touchdowns by substitute Osea Kolinisau, a fourth by Samisoni Viriviri, and three conversions by Emosi Mulevoro saw Fiji complete a startling comeback.

It was Fiji's second victory of the 2013 IRB sevens series.

But there was controversy when Fiji's Ilai Tinai was yellow-carded for a tip-tackle on Lee Williams in the first half - an offence normally punished by a red card.

Wales reached their first-ever Hong Kong final thanks to an emphatic 19-0 win over Kenya in the semi final, with tries from Lee Williams, Craig Price and Sam Cross, with Rhys Jones adding two conversions.

Earlier they had beaten Canada 28-14 in the quarter final, twice coming from behind with tries from Craig Price, Adam Thomas, Alex Webber and Cory Allen, all converted by Rhys Jones.

In the group stage, Wales edged 19-14 victories over both Australia and Argentina.

The Welsh squad dedicated their final appearance to their team-mate Ifan Evans, whose career has been cut short by a serious neck injury.

The 29-year-old admitted it was a struggle to hold back the tears when the Welsh players sang the national anthem before the final with his name 'IFAN' written on all of their wrists.

"That was tough," said the 29-year-old from Aberystwyth. "I didn't know they were going to do that so it took me by surprise. I had tears in my eyes - that gesture meant everything to me."

New Zealand won the third-place final, beating Kenya 36-5. Samoa won the Plate thanks to a 12-7 win over Canada, while England were 42-7 victors over Hong Kong in the Bowl final.