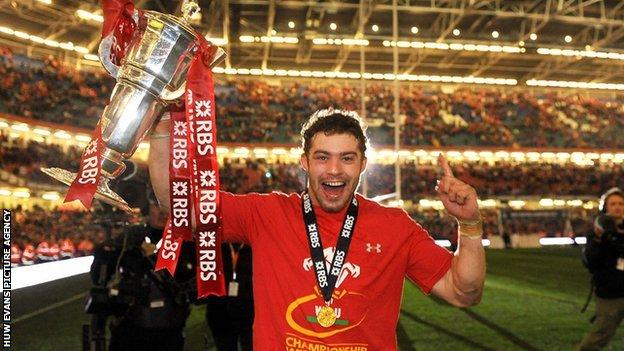 Full-back Leigh Halfpenny has been named Six Nations player of the championship after helping to steer Wales to a second consecutive title.

The Blues star secured 40% of the public's vote, with more than 80,000 people voting. Italy's Alessandro Zanni was second with 11%.

Halfpenny scored 74 points for Wales during the tournament, and was rock-solid in defence.

"I can't thank the people who voted for me enough," he said.

"For my name to be added to the list of players who have won this award in the past is incredible and extremely humbling."

Halfpenny is the second Welshman to win the accolade in successive seasons, following on from Dragons flanker Dan Lydiate.

He played every game for Wales as they recovered from a first round defeat by Ireland to clinch the title with a record 30-3 win over England on the final weekend.

Scotland's Stuart Hogg polled 8% of the vote to finish third.

A shortlist of 15 players was was compiled, based on technical statistics and fan sentiment on social media.

"Leigh is fearless, courageous and is one of the best full backs in World rugby," said Howley.

"He constantly strives for perfection in his preparation and performance and sets high standards.

"He is a model professional in every facet of the game and I am delighted for him.

"His contribution to the side has been huge and he fully deserves to be named player of the championship."