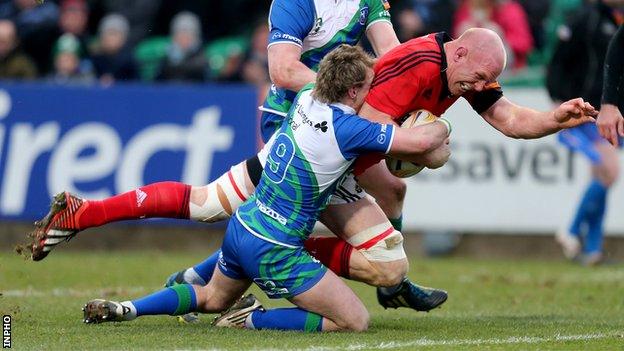 O'Connell played for the first time October having surgery to correct a bulging disc in his back.

Both he and Damien Varley touched down inside the opening 14 minutes at Musgrave Park, with a late Ronan O'Gara penalty making it 15-0 at the break.

But although Varley doubled his try tally in the second half, Munster failed to secure the bonus point.

Munster made early inroads with their forwards providing quick ball and Casey Laulala almost breaking through on the left, but Willie Faloon's tap tackle denied him.

Connacht's determined defence held the hosts in check, maintaining their composure despite strong carries from O'Connell and Tommy O'Donnell.

But they could do nothing to stop young scrum-half Cathal Sheridan from supplying a lovely one-handed pass to O'Connell, who powered over from the opening try from close range.

O'Gara converted and he was then floored by a late challenge from Michael Kearney in the next phase, which earned the Connacht lock a yellow card.

From the ensuing lineout, an O'Connell-inspired maul led to hooker Varley plunging over the whitewash for an unconverted effort.

The fast pace continued with Danie Poolman and Kieran Marmion threatening for the visitors, and Munster full-back Felix Jones also getting a chance to stretch his legs.

O'Gara looked particularly sharp, evidently keen to show his worth after losing his place in the Ireland squad and he dovetailed well with newcomer Sheridan.

The second quarter was error-strewn, but the penalty count was keeping Connacht pinned back and O'Gara rifled over a right-sided penalty in injury time.

Munster added their third try in the 50th minute, using their solid set piece as the platform.

After man-of-the-match O'Connell set up a close-in ruck, Varley ghosted in for an opportunist score with the defending Denis Buckley and Mike McCarthy both caught out.

Connacht gleaned more territory in their attempts to respond, with replacement scrum-half Paul O'Donohoe bundled into touch as he tried to reach over in the left corner.

Dan Parks was unable to exert much influence and disappointingly, a fine midfield run from Gavin Duffy came to nothing as the supporting McCarthy lacked support.

Connacht had won their previous three league games but never threatened Munster's lead, and this inter-provincial clash petered out with the hosts, so desperate for the bonus point to boost their challenge for an unlikely play-off spot, getting no reward for a late series of frantic attacks.