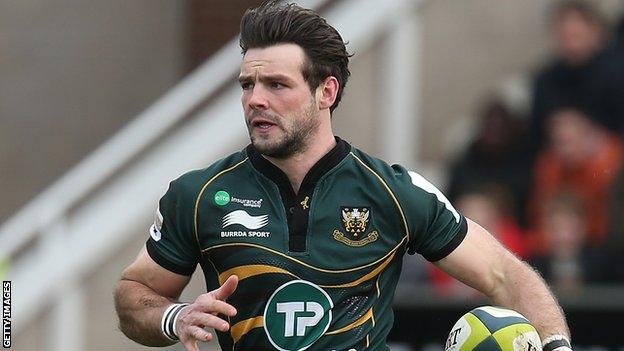 Northampton Saints full-back Ben Foden believes missing last month's Premiership game against Gloucester was the catalyst for an upturn in his form.

Foden missed the defeat at Franklin's Gardens to rest an ankle problem after playing 10 games in a row.

He told BBC Radio Northampton: "I missed that game and I think that's where things started to go on the rise.

"I had an injection and looked at the way I'm training. Hopefully I can finish off the season in good form."

I don't think I'm too far away [from an England recall]

The 27-year-old has contributed to three consecutive wins in the Premiership since the Gloucester game, which have carried Saints back into the top four.

They are away to London Wasps on Saturday before the East Midlands derby against Leicester Tigers on 30 March and then finish the league season by playing London Welsh, Sale and Harlequins.

"This is when trophies are won, so we must treat these last five games as knock-out games," Foden said.

He has 30 caps and was selected in Stuart Lancaster's England squad for the Six Nations but did not feature in the competition.

"Obviously, for England to lose to Wales was very disappointing," Foden added.

"I still have to get back from this injury and prove myself playing for Saints, but I don't think I'm too far away.

"Hopefully I can [help] get us into a semi-final and final of the Premiership and you can't argue with that sort of form. If I'm playing well then hopefully the re-selection will come."