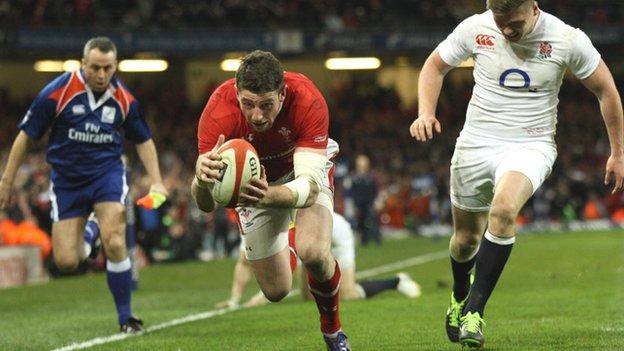 Wales wing Alex Cuthbert could miss the rest of the season with a leg injury.

The Cardiff Blues say Cuthbert suffered a grade two hamstring strain in the first half of Wales' record 30-3 win over England in Cardiff on Saturday.

The 22-year-old's two second half tries were decisive as Wales retained the Six Nations title, and reinforced his claim for a place on the Lions tour of Australia this summer.

He is expected to be out of action for between four and six weeks.

The Blues have five matches left in the Pro 12 championship, finishing with a visit to Ulster on 3 May.

Cuthbert was the leading try scorer in the Six Nations with four, and has now scored nine tries in 18 international appearances for Wales.