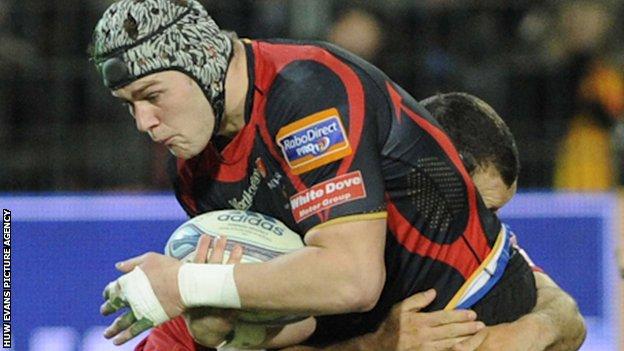 Dan Lydiate makes his return from six months out to start for the Newport Gwent Dragons in their RaboDirect Pro12 clash against Ospreys on Friday.

The Wales flanker, 25, fractured his ankle while playing for the Dragons and then suffered a hamstring injury.

Lydiate, the 2012 Six Nations player of the tournament, had been expected to return for the Welsh derby with Scarlets on Saturday, 30 March.

But he is included, with Andrew Coombs, against the Ospreys.

Dragons coach Darren Edwards had claimed there was a chance Lydiate, who has announced he will leave Rodney Parade in the summer, could be on the bench for the Ospreys clash.

Lydiate, capped 27 times, returned to light training with the Dragons sooner than expected and had been pencilled in for their Pro12 game at home to Leinster on 1 March, but a hamstring injury delayed his return.

On Monday Edwards said: "Dan is recovering well. He is still going through ongoing fitness protocols.

"Unfortunately, he strained a hamstring a couple of weeks back which has delayed his return. He is close."

Lydiate's return gives him an outside chance of making the British and Irish Lions tour to Australia in June.

He has four Pro12 games with the Dragons against Ospreys, Scarlets, Ulster and Munster to prove his fitness and make a case to be in Warren Gatland's squad, which will be named on 30 April.

Lydiate was part of Wales' impressive back row, along with open-side flanker Sam Warburton and number eight Faletau, that helped Wales reach the 2011 World Cup semi-finals and win a Six Nations Grand Slam in 2012.